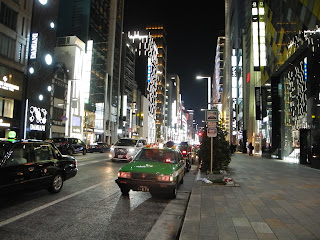 Years ago, one of my more well-to-do students once suggested that all of us try out a restaurant in Ginza for lunch. Of course, valentines immediately popped all around my head at the opportunity, since eating out in one of the world's most expensive neighbourhoods for me usually meant dropping in at places that had golden arches or comments like "Would you like me to microwave that for you, sir?" (yes, those stores do exist in Ginza, too).


The restaurant that my student mentioned is called Zakuro, and I had to look it up to remember what they specialized in. It turns out that they provide lots and lots of beef through the media of sukiyaki, shabu-shabu and just plain steak. Plus I'm sure that the beef has some wonderful marbling. Alas, the wish was never granted for various reasons but perhaps someday I may still try it out on my next visit to Tokyo. Then again, maybe someday I might win Lotto 649 or my credit card company will upgrade me to Platinum status (not likely).

However, I have been able to acquire this "Zakuro" for you tonight. This is actually a track from Minami Kitasono's（北園みなみ）1st album "Promenade" which was released back in October 2014, and much like the other song by him that I've written about, "Yuugiri"（夕霧）, it's a wonderful melange of different musical styles ranging from jazz to something more urban contemporary. Unlike the more detective caper-sounding "Yuugiri", however, "Zakuro" has more of that breezy "Let's take a break at that Parisian cafe" sort of atmosphere.

Once again, though, a "Zakuro" promise was left unfulfilled here, too, since when I wrote up the article for "Yuugiri", I had remarked that I would get at least one of Kitasono's albums by Xmas 2018. Alas, I have yet to pull the trigger but this time, either "Promenade" or his 2nd album "Lumiere" from 2015 is on the must-buy list for later this spring. I mean, two good songs with that feeling of whimsy? Certainly, I can't resist that for long, can I?

Incidentally, zakuro is translated as the fruit pomegranate which I thought was a rather strange name for a high-falutin' steak restaurant. But, hey, as long as the food is good, and I just found out that lunch time isn't too expensive there...at least, for a Ginza restaurant, and the beef isn't chopped up and formed into discs!
Posted by J-Canuck at 8:58 PM