Happy Songs for Me 2 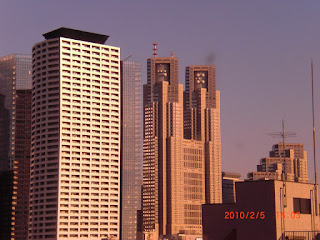 Up until a few minutes ago, I had been prepared to give an Author's Picks on "Psych-Up Songs"...those tunes that would give me that extra burst of energy and joy. But then I remembered that a scant few months earlier, I had already put up something very similar in the form of "Happy Songs for Me (for International Happiness Day)". In fact, there were a couple of songs that I was going to put up in this list that are already up in that other article. So I've just decided to go with the sequel formula here.

When I'm about to undertake a major project, I take a dose of this and don't need to call the doctor in the morning. I realize that in all likelihood the committee planning the 2020 Olympic Games in Tokyo will assign one of the big songwriters to create a new tune to represent the city at the Opening Ceremonies, but if an oldie-but-goodie can be introduced during the entertainment phase on the opening day, this is the one song that I'd want....with 3D projection mapping of dancing Tokyo buildings! If Yoshida can't perform this, then I nominate Kahoru Kohiruimaki or Miwa Yoshida.

The perfect summer song that wasn't sung by Tatsuro Yamashita. And it provides me with a fine sense of catharsis as it did for the finale of that 6th episode of the anime "Space Dandy" when the sudden and happy scene of space surfing came out of the blue. When I finish a major project, this is the song that I would like to play...as I walk off proudly into the sunset.

Another epic and EPO-esque song of City Pop coolness. Striding down the main strip of either East or West Shinjuku as the sun is heading out would be the ideal setting for this one. I think it deserved a higher profile when it comes to the EPO discography but for the die-hard fans, it's probably a well-remembered entry in any event. And considering the title, perhaps it's also the tune reminiscent of past economic days of glory.

When I recently heard the fictional Kitaoji High School band perform "Rydeen" on the anime "Hibike Euphonium", my jaw dropped and my joy rose. Yep, even after 35 years, a brass band version of a technopop tune had me squeeing like a little boy. At the time I first heard "Rydeen" in its original computer glory, I had no idea that the electronic pitter-pats which introduced the songs actually represented horse hoof beats but I immediately "got"  the high-speed fun of the piece and was more than happy to ride on the YMO express.

I really cannot afford to take luxurious trips to far-flung tropical destinations...at least, not yet. However, "Loveland, Island" makes for a pleasant aural placebo...heck, a lot of Yamashita's summery works during the late 70s and early 80s would qualify but there is something about this particular song that just has me soaring off into the stratosphere over the Hawaiian coast. It's too bad that the original music video has been taken off the Net since it was fun to watch that supposedly old fellow bust a move like a pro...apparently that was none other than a disguised Noriyuki Higashiyama for 80s aidoru group Shonentai.

The mission of Kome Kome Club has been to bring zany, colourful and fun music to all who will listen, and a lot of folks did. Probably a majority of them would place some of their other hits above "Abracadabra", but for me, it's in my Top 3 for K2C. As the title hints, it's just this magic carpet ride led by a master magician...if the magician were Beetlejuice as portrayed by leader Tatsuya Ishii. It's one of a few songs that can actually make me sweat.

Referring to Minako Yoshida's "TOWN" at the very top of the list, Maki Ohguro's "Atsukunare" actually was one of the official songs for the 1996 Atlanta Games coverage by national broadcaster NHK. And yep, it did the right job in that it could get any couch potato such as yours truly pepped up enough to take on the planet. At least, it got me pepped up enough to get off the sofa and head over to the nearest CD shop to purchase the single.

But after writing this list down, I realized that although I will still call this "Happy Songs 2", all of the entries here indeed have that energy-building factor. It's not just the smile that has been put on my face but also that psyching-up feeling in my brain.