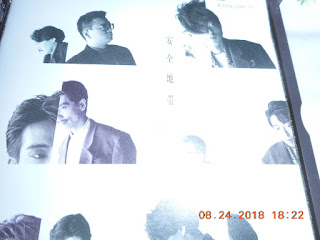 Happy Monday! Pretty cold out there but nothing that a born-and-bred Canadian cannot take well. Last night, it was one of those family get-togethers so my brother came and picked us all up. As we were heading for the restaurant, my brother switched over from the seasonal Xmas songs on the radio to the downloaded stuff, and strangely enough, it turned out to be a number of Anzen Chitai（安全地帯）songs.

He's not a big kayo kyoku/J-Pop fan by any means although he knows some of the major folks such as Seiko Matsuda（松田聖子）, AKB48 and the aforementioned Anzen Chitai. However, as we were listening to one of the Hokkaido-based band's more urban contemporary contributions, he remarked at how David Foster-like the arrangement was. Well, Foster had a few fingers at least in a number of projects for Japanese musicians back in the 1980s so I would love to introduce some of the material by Mariya Takeuchi（竹内まりや）and Ami Ozaki（尾崎亜美）. As far as I know, Foster has never collaborated with Anzen Chitai.


Another song that played just before we hit the restaurant was this melancholy ballad from the band's "Anzen Chitai III~Dakishimetai"（安全地帯III〜抱きしめたい...I Want to Hold You）album in December 1984. "Atelier" is another natsukashii tune that I've heard over and over over the years that vocalist Koji Tamaki（玉置浩二）and lyricist Goro Matsui（松井五郎）created. It describes what sounds like an elderly man or woman discovering an old letter that was lying somewhere in the titular chamber involving an old flame from decades back who has probably since died, thereby ending that romance.

It's quite the atmospheric and introspective song (not really Foster-y, though) with that mandolin (need that mug of cocoa) that seems to take the story outside of Japan over to some lonely house in the forest in Europe. Still, the sound is very Anzen Chitai. Good golly! Has it been 34 years already?
Posted by J-Canuck at 3:35 PM