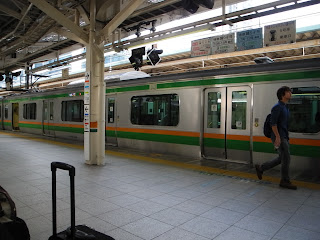 Man, do the Japanese love trains. Airplanes may be giving them their run for the money in terms of transporting folks on the archipelago all over the place, but there is a healthy beating heart when it comes to everything from the sleekest Shinkansen to the pokiest local train.


Just a few minutes ago, I had written about cellist-composer Hajime Mizoguchi's（溝口肇）contribution to the "Tenkuu no Escaflowne"（天空のエスカフローネ）soundtrack, assuming that this was the first time that I had heard him. Well, to my surprise, it turns out that I had been hearing him for years and years...most notably through his theme song for the short 5-minute vignette titled "Sekai no Shasō kara" which directly translates as "From The World's Train Windows" but is officially known in English as "See The World by Train".

It's been aired weeknights at the 11:00 hour, and I should've known it was by Mizoguchi, thanks to that warm cello taking us along. In its brief 5 minutes, "Sekai no Shasō kara" introduces trains from all over the world to sate the appetite for all of those internationally-minded train otaku.


Here, he gives the full performance of the theme song through a slightly jazzy interpretation.
Posted by J-Canuck at 5:02 PM