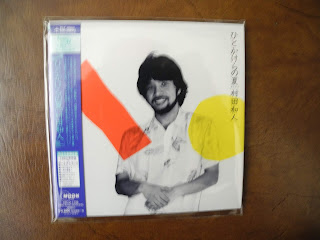 For me, there are two types of fatigue. There's the one that comes about from going through some hell, whether it be cramming for exams or trying to plow through useless mounds of paperwork or dealing with someone you simply don't like. I've experienced all three. Then, there's the one that follows the successful completion of a project; you may be tired but it's a good type of tired. You put your energies into something worthwhile and you can now heal that fatigue with a party or your solo glass of libation. I've gone through that, too.


The late singer-songwriter Kazuhito Murata（村田和人）may have introduced a variation on the second one through his song "Shiawase ni Tsukarete" (Getting Tired Happily) which came from his 5th album "Boy's Life" released in May 1987. Murata wrote and composed this AOR tune with a good dollop of Latin; Ronnie Foster also co-composed the song while AB'S keyboardist Yoshihiko Ando（安藤芳彦）co-wrote the lyrics.

Within those lyrics, Murata relates the story of a man who has finished a romantic relationship and though there is that tinge of regret, there's also that feeling of wisdom (and perhaps even relief) that he learned from his experience via his ex-partner. It may not have worked out ultimately but he feels that he got something good out of it. Now that I think of it, perhaps this fatigue may actually be a hybrid of the two that I explained above. In any case, "Shiawase ni Tsukarete" is worthy of listening while knocking back a Corona.
Posted by J-Canuck at 2:12 PM