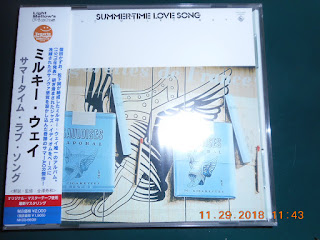 Back in the summer of 2017, I ended up my first article on this collaborative duo The Milky Way's "Summertime Love Song" by stating that it would be nice to get the whole album if it were ever out on compact disc. Well, guess what? It is and it happily didn't cost me an arm and a leg either. 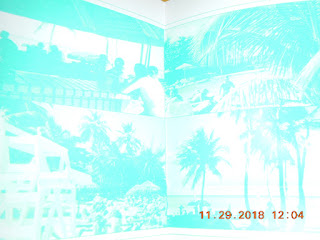 The album "Summertime Love Song" came out in 1979 as a one-off project between guitarist Makoto Matsushita（松下誠）and keyboardist Kazuo Nobuta（信田一男）, and it's made up of AOR versions of standards and a few of their own concoctions matching the soothing feelings of the covers. Along with the title track, I've already taken care of one other song from the album, their take on "Theme From A Summer Place".


Get those caipirinhas, mint juleps or whatever cocktails get you in that state of relaxation, and start with some "Wave", the cover of the Antonio Carlos Jobim classic. As I've already stated, this has more of the AOR feeling as opposed to the original bossa nova (although this one also has a nice taste of the bossa flavour) and the jazzy take by Miki Matsubara（松原みき）that I wrote about back in late September. To be honest, I still prefer the Matsubara one but The Milky Way can sure induce those alpha waves. In fact, I think that it's so relaxing that I completely forgot that Matsushita and Nobuta sang this totally in Japanese, thanks to lyricist and poet Konosuke Fuji（藤公之介）.


Recently, I've been in thrall to Boz Scaggs' ultra-cool "Lowdown" (the bass and those horns), but I also know about his easy nighttime "Harbor Lights". The Milky Way makes the Japanese version go down so smoothly here as well with Yoshiko Miura（三浦徳子）providing the words. 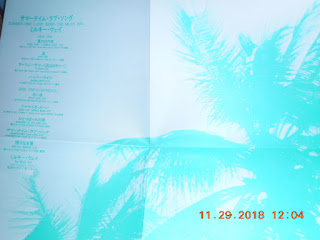 "Shiroi Nami"（白い波...White Wave）is another Milky Way cover but this one is of a Japanese bossa nova song created by legendary saxophonist Sadao Watanabe（渡辺貞夫）for the album "Bossa Nova Concert" in 1967 according to the discography on his website. The lyrics were provided by Hide Demon（出門英）who would later become one-half of the singing duo Hide & Rosanna（ヒデとロザンナ）.


"Hitoribocchi no Nagisa"（ひとりぼっちの渚...Memories in the Sand）is one of the three original compositions for the album which includes the title track. Written by Fuji and composed by Nobuta, I think it's the farthest away from the overall theme of Latin-infused AOR and has that feeling of a stroll on a spring day. I like the "veil-like" chorus that is described as such in the liner notes, and despite the use of synthesizers, "Hitoribocchi no Nagisa" still has that atmosphere of an old-timey tune.


The final track is the third original composition by Fuji and Nobuta, "Kagirinaki Natsu"（限りなきの夏...Endless Summer）which serves as the epilogue to the whole Milky Way experience of a summer day by the seaside. It's short and sweet, and the tinkling of the keyboards at the end seems to hint at the sight of a million stars up in the night sky, untroubled by light pollution from the city. There's also that melodic feeling of "Time to go to bed, folks!".

A commenter asked me this morning about my choice of favourite City Pop/AOR albums. "Summertime Love Song" is definitely not a City Pop release; Matsushita would make his own masterpiece in that genre with "First Light" in 1981. This album, though, is something that I would consider as a fine AOR creation. 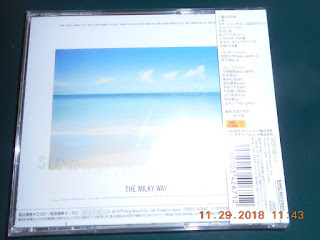