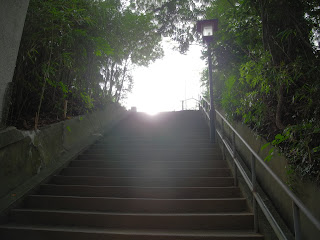 Yes, folks, there is only one episode left in "Zombieland Saga"（ゾンビランドサガ）, and not surprisingly, it looks like the focus for the finale will be on the heart and soul of zombie aidoru group Franchouchou, Sakura Minamoto. She has borne the brunt of a lot of stuff over the first eleven shows, and, as it was revealed in Episode 11, it's simply because she was born to bear the brunt of a lot of stuff. Although the choice of Sakura to be the central character in the last episode was a natural one, I was kinda hoping for episodes focused on the old-Japan-classy Yugiri and, of course, the legendary Tae Yamada, but maybe that will be for any potential movie or a second series.


In any case, perhaps I can use this opportunity to write about the usual ending theme for "Zombieland Saga", "Hikari e" (To The Light). One Japanese YouTube commenter gave a fairly cheeky opinion on this bittersweet ballad by suggesting that it was a song about graduating from life, and I have to agree that "Hikari e", which was composed by Yosuke Yamashita（山下洋介）, feels like something which would be sung at a tearful graduation ceremony, when compared to the suspense of the opener "Adabana Necromancy"（徒花ネクロマンシー）. Some nice harmonies.

I have yet to go into the lyrics by Shin Furuya（古屋真）but my anime buddy told me that it was about not being able to return to your old life and about going forward. Considering that the ladies of Franchouchou are the undead, it's not exactly the happiest theme but aside from Sakura right now, the rest of the group are doing quite well. Supposedly, the finale will be airing a few days after I write this, so by the weekend, "Zombieland Saga" fans will know the ultimate fate of this motley crew. Personally, I think legendary Tae is married to crazed manager Kotaro, and will finally awaken to browbeat hubby like a really angry Sailor Moon.