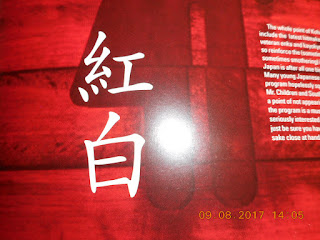 Well, the lineup and the songs for the 69th Kohaku Utagassen for this New Year's Eve are up on Wikipedia. Just like the old tradition for a bride on her wedding day, there's something old (the appearance of Saburo Kitajima（北島三郎）, some five years after he retired from the special), something new (folks like Aimyon（あいみょん）and Suchmos coming onto the program for the first time), something borrowed (the 90s dances for DA PUMP's "USA"), and something blue (you never know what Southern All Stars might pull off on live television on NHK...the wiring for the NHK switchboard might be reinforced).


On December 26th (just yesterday as I write this), it was announced that singer-songwriter Kenshi Yonezu（米津玄師）was confirmed to be appearing on the Kohaku. I've never heard of him but considering that NHK is making this announcement with less than a week to go before the show goes on, I gather that he must be a pretty big deal. Yonezu had apparently declined an initial invitation but when NHK offered to have him perform live from his native Tokushima Prefecture, he had a change of heart.

The song that he's scheduled to sing is "Lemon", his 8th single released in March 2018. In his J-Wiki biography, he admires bands such as Asian Kung-Fu Generation and Radwimps, and although I don't know any of the bands that have been mentioned well enough to give a comparison, for "Lemon", his delivery reminds me somewhat of the vocals of Masayoshi Yamazaki（山崎まさよし）. From what I've heard from this song alone, there is quite the powerful balladeer in Yonezu. Plus, there is something solid and reassuring with his voice as well even though he's only 27...something along the lines of a child having a parent or relative standing dependably behind him or her at a funeral.

Initially, after looking at his lyrics, I had thought that "Lemon" was another example of going through the emotions after a romantic breakup but then looking at the video and the writeup in the J-Wiki article for the song, I realized that this was probably about coming to some sort of stable ground following a death of a loved one. The olfactory touchstone seems to be the scent of the titular fruit in the title. The one part that kinda struck me was seeing Yonezu appearing in one of the church pews wearing stilettos; there was no explanation in the J-Wiki article about what the significance was for that, and there is even an article on the song on J-Rock News inquiring about it without any answer given. Perhaps the loved one that was lost was indeed a lover, and Yonezu wanted to channel her feelings by literally and figuratively walking in her shoes. As sad as the images were, the end of the video with the camera slowing panning away from the church visitors as they talked things over gives some hope of resolution to the tragedy.


"Lemon" was also used as the theme song for the TBS drama "Unnatural"（アンナチュラル）, about a pathologist studying the whys and wherefors of diseases. The single reached No. 2 on Oricon and went Platinum, breaking a million sales, and it looks like it'll settle in as the 18th-ranked single of the year. Even the music video on YouTube, uploaded by Yonezu, has reached over 243 million views since it first appeared in February. Perhaps the theme was also quite reassuring for viewers.


Yonezu covers pop, rock, R&B and electronica, but one thing that I was surprised about was that some years earlier, he had performed under the Vocaloid name of Hachi（ハチ）. This is one of his songs under that guise, "Donut Hole".
Posted by J-Canuck at 4:10 PM