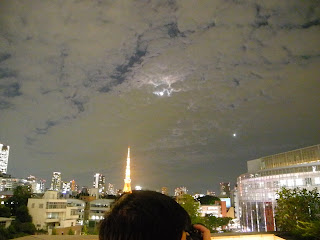 Over 2 1/2 years ago, Noelle wrote about "Otsuki-San Konbanwa" (Good Evening, Mr. Moon) from 1957, a bittersweet telling of a man out in the small village who still pines for that woman who left long ago for the charms of the big city.


As was often the case back over half a century ago, singers and their people often made like a feeding frenzy around a potential hit to release their own versions in the same year, and such was the case with "Otsuki-San". I think Takeo Fujishima（藤島桓夫）won the sweepstakes in terms of how quickly the song was released, but Hachiro Kasuga（春日八郎）also gave his version in 1957.

In commenting on Noelle's article, I remarked that I did prefer Yoshio Tabata's（田端義夫）cover over the Fujishima original, but I have to say that Kasuga's take on "Otsuki-San" is pretty darn good as well. It's that extra layer of timbre with Kasuga that helps with the plaintive call to the moon. As was also cited in the original article, Mataichi Matsumura（松村又一）and Minoru Endo（遠藤実）were responsible for the creation of the song.
Posted by J-Canuck at 9:58 PM