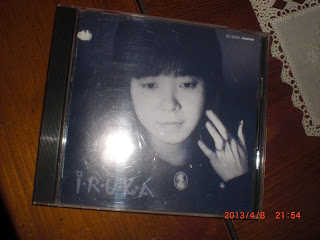 Iruka（イルカ）, one of the very first non-aidoru, non-enka singers that I ever heard when I started this journey of kayo kyoku, is someone with a golden voice that I first realized was a folk/New Music singer and songwriter in the 1970s but then also embraced a pop style going into the 1980s. In fact, she joined quite a few other singers from that folk genre as they dove into the urban contemporary genre of City Pop. A couple of representative songs from that latter category would be "Follow Me", arranged by Kazumasa Oda（小田和正）from Off-Course（オフコース）, and "Yoake no Goodbye"（夜明けのグッドバイ）, also produced by Oda, both of which came out in the early 1980s.

Well, I've discovered another example of the City Pop/Pop Iruka, and it is a track from her 1985 12th album "Heart Land". "Konkuri no Tokai de" (In The Concrete City) is quite an interesting animal. This time, this isn't an Iruka creation but one by lyricist Yasushi Akimoto（秋元康）and composer/arranger Tetsuji Hayashi（林哲司）. Plus, the arrangement seems to combine some of that West Coast AOR and the breezy daytime side of City Pop. However, although I couldn't find the written lyrics on the Net and had to listen carefully to what was sung, I think Akimoto's bittersweet words talk of a woman getting off at a train platform in her small hometown, perhaps having had enough of the cruel city...most likely to flee from a finished relationship. I love the different synths in play here along with that electric guitar solo near the end.

Even though this isn't Iruka's own creation, she does give another fine performance here and I would be more than happy to purchase "Heart Land", if it hasn't gone haiban.
Posted by J-Canuck at 8:27 PM