Hmm, compared to my previous Top 10-ish lists this year's had the least forethought. Ordinarily I would have decided way, way, way in advanced as to who I'd feature, but this time, I literally decided on the one just a few days prior. Technically, I did kind of have ASKA or The Cool Five in mind, but they didn't seem as compelling as I had already done one on C&A as well as Mae-Kiyo. So I went out on a limb to choose one of the fellows I had been binge-listening as of late.


That gentle and beaming smile, that welcoming persona, that catchphrase - it's Haruo Minami (三波春夫).

If I remember right, Haru-san was the last of the Yonin Shu I got into, and for the longest time, for some reason still unknown to me, he lagged behind in the way of my interest in the four. Perhaps it was because I was still trying to adjust to the Muchi and Michi sort of enka - and Lord knows that was tough! - so I had no time for Haru-san. But as you can very clearly see at this point, he now only stands just behind Hachi. Once I settled comfortably (more or less) into hardcore enka, I grew to love his expressive and chirpy vocals, and, of course, his penchant of going from warm and friendly to absolutely insane at the snap of one's fingers; the abrupt and hilarious transition to house music and rap later in his career only made me respect him even more as a singer. And, of course there's that statue park visit earlier this year. 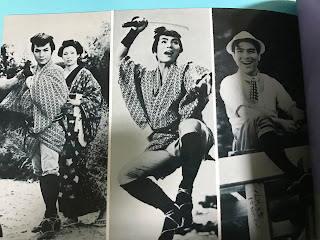 Through him, I also got to know the genre of traditional narrative singing. I'm still not a fan of the pure form of it, but Minami's fusion of rokyoku plus kayo made it so much more exciting and listenable. And learning about historical figures and old fables through these one-man musicals is really fascinating. In fact, nearly half of my list consists of kayo-rokyoku. 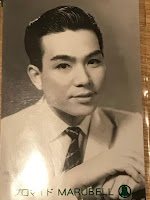 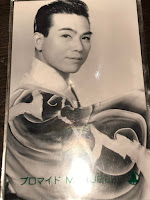 (Serious fan-girling ahead - you have been warned.) However, similar to Hachi's case, it would be a lie to say that the bromides did not contribute to this sudden spike in interest. I mean, c'mon, the guy was hot. What would be a little different is that while, yes, Kasuga was a real cutie back in the day too, I prefer his pop singing style and song type more than Minami's minyo-esque delivery. So, well, I guess the bromides were a real interest booster for Minami. Also, I saw on the Marubell website a picture of him posing with a saxophone. The ridiculous scene aside, guy's been hiding some muscly arms under those kimono sleeves. Can you imagine a ripped Haru-san? Hmm, I can't seem to do so very well... But getting that picture would help in visualizing. 👀 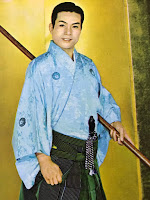 *Ahem* Yeah - um - before this goes completely off the rails, let's continue. Looking at my picks, there'll definitely be a good handful of familiar favourites, but at the same time I think there'll be quite a surprise in store. Well, House Haruo doesn't really make an appearance because as awesome as that is, I'm simply not a fan of House music all around, but... there'll be something just as good. :)

With this introduction, I believe we can begin. I tried arranging the selection in order, but it's just a rough estimate as I feel like I like a good number of them to a similar degree.

I feel like the list will not do if I don't add the song that piqued my interest in Japan's National Singer. Despite being an enka freshie at the time, I took to Minami's performance of the matatabi enka-rokyoku about the drunkard ronin Miki Hirate, "Otone Mujou" (大利根無情). Not the most ear-friendly song for me then, but his gestures and Dr Jekyll & Mr Hyde switches were so incredibly hypnotizing that I had to keep watching it over and over again.

After my introduction to Minami came the 9th contender, "Chanchiki Okesa" (チャンチキおけさ). Compared to no.10, it was overall a much more listenable and catchy - a nice little Niigata minyo-inspired bokyo tune. I suppose I've been watching "Chanchiki Okesa" videos often enough to realise that the fellow would always raise his hands up, as if shading himself from the light, at the very last verse of the song.

Next on the list is "Omanta Bayashi" (おまんた囃子). Now this is a festive song! The brisk pace with the clanking percussions, thumping drums and the shrill flute makes one feel as if they've just been transported into the middle of Itoigawa's festival. My favourite bit of "Omanta Bayashi" has got to be when Haru-san calls out to the folks of the different regions in Japan to join in on the fun - I really like the way in which his voice just bounces around from word to word when he sings it.

Y'know that little surprise I mentioned earlier? Yeah, this is it: Yonaoshi Rock 'n' Roll (世直しロックンロール). The previous entries have focused heavily on what Haru-san was known for, ondos, minyos and rokyoku. Now, let's have something different. Let's have rock 'n' roll.

Well, I suppose rock Haruo-chan isn't as earth-shattering after you've discovered House Haruo, but it's great to hear the hip grandpa (by then) tear up the rug with the band members screaming their lungs out. The cherry on top, however, is when Haruo-chan checks up on a couple of listless guys during the spoken sections, only to out that his daughter is up to no good and his car got wrecked - the freak out is gold. If only there was a live version of this! I wonder if he'd still stick to his kimono, or if he'd actually wear a black leather jacket.

By the way, "Yonaoshi Rock 'n' Roll" can only be found on Spotify, so I've put the link to the album it's in. It's Track 10 in the album, but I would like to note that in order to listen to stuff on Spotify you need to sign up (for free, if you're not keen on Premium).

Leaving the chaotic foray into rock 'n' roll, we come back down to earth for the chouhen kayo-rokyoku, where most cap at around 8 to 9 minutes. They're really lengthy by regular song standards, but Haru-san just makes them sound so fascinating. As such, there are a little less than a handful of them here, and the first you see here is "Kobe wo Hiraku Kiyomori" (神戸を拓く清盛).

Coming from his "Tale of Heike" series in 1994, Minami tells the tale of how the powerful Heian era figure Kiyomori Taira (and his son, Shigemori? I'm not sure on this end) built Kobe's port. Though this doesn't have him yelling about something, I find that his portrayal of Kiyomori via the grand and noble score, and the trials of constructing a port in the face of rough seas through his threatening baritone are spot on. Though I like "Kobe wo Hiraku Kiyomori" in its entirety, I also find that the first two and the very last stanzas are good enough to work as a regular length enka song.

Now, when it comes to chouhen kayo-rokyoku, I cannot leave out Minami's magnum opus, "Genroku Mei Sofu Tawaraboshi Genba" (元禄名槍譜 俵星玄蕃). Though intimidated by its duration at first, the melody variation, his skillful and expressive delivery, and elegant moves shine through and makes one lose track of time. And in the way of his violent outbursts, I thought "Otone Mujou" had Minami going nuts - how wrong was I. Nothing prepared me for "Soba-ya ka!", which definitely took "Tawaraboshi Genba" up to the next level of insanity. Plus, this was where I discovered his aptitude for rap. Man, guy must've been fire at tongue-twisters.

Speaking of violent outbursts, the other tune I know of for now to rival "Tawaraboshi Genba" in that is "Genroku Sakura Fubuki Ketsuto Takadanobaba" (元禄桜吹雪 決斗高田の馬場), which I also like to call "Showdown at the Takadanobaba" (it ain't the O.K. Corral here!). This one revolves around Horibe Yasubei of the 47 ronin and his, well, showdown at Takadanobaba. As to why this is ahead of "Tawaraboshi Genba", I feel that Minami takes you on a wilder ride with "Ketsuto"; the music itself has got a more modern and groovy touch, and his voice gets a lot more intense and guttural, making for a more dramatic sound. And, of course, the shouts and growls in this one are off the rails.

The song that first introduced me to the power-hungry Kiyomori, "Kiyomori Tenka wo Iru" (清盛天下を射る) takes the bronze. As with no.6, Haru-san steps into the shoes of the titular character in a time before the official went on a dark path for ambition, where he protects the capital from a bunch of rouge monk warriors. I love me some grand sounding melodies and Minami portraying heroic characters, and its considerably shorter length made it once of my go-to tunes for listening on the go, so this one was a pretty obvious choice for the podium.

The link I've put for "Kiyomori Tenka wo Iru" to a Special Stage segment between Haru-san and a sassy Takashi Hosokawa (細川たかし). The song can be found at part 4 at the 7:06 mark. You can also listen to it on Spotify, but as with his other rokyoku stuff, I find that half the joy comes from watching him perform it.

I think you guys would have seen this coming from the way I've been talking about the snowy matatabi enka with a gory end (for the bad guys, of course). But then again, I didn't put "Yuki no Wataridori" (雪の渡り鳥) in first place. Well, when it really comes down to the line "Yuki no Wataridori", while a jaunty romp in the snow-covered Edo countryside, it's not as catchy as no.1.

Taking the number 1 spot on this list is not a fierce ronin, nor is it a powerful historical figure, it's instead a funakata-san! In many of his works, Minami exudes happiness and optimism, but somehow I feel that the one that shows this most clearly is "Funakata-san yo" (船方さんよ). It's a simple upbeat ditty about hitching a ride aboard this tiny boat, but his fluctuating and fluttering vocals makes it a joy to the ears. It's quite hard to stay bummed out when one listens to this, what with the "Oi-s" and "Enyasa-s", so this is why "Funakata-san yo" has manage to sail its way to the top. 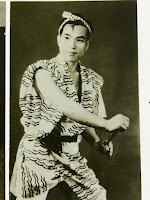 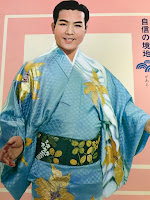 And that about wraps up my Top 10 Minami list. I hope you've enjoyed listening to some classics as well as the lesser known stuff Japan's National Singer had to offer. I got to say that he's come a long way in my books. Upon skimming through the "Otone Mujou" article, which is my very first write-up on him, I actually said that he wasn't one of my favourites. Ha! How that has changed! 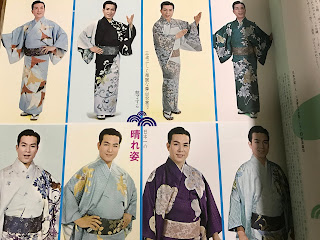 Finally got this article out on time again. :)
Posted by Noelle Tham at 10:53 PM