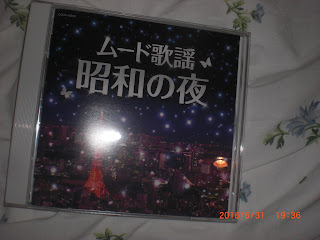 Another regular NHK kayo-based program that has made its way onto TV Japan is "Gogo Uta"（ごごウタ...Afternoon Music） which is co-hosted by veteran funny man Kazuki Kosakai（小堺一機）. Compared to the other shows including "Uta Kon"（うたコン）, "Gogo Uta", with its Friday afternoon time slot, is a program which seems to be a bit more relaxing for the guests (well, as relaxed as one could be in front of a large studio audience). I'm not sure whether the producers had meant it as such, but I take it as if the Green Room atmosphere were brought out into the open (although, of course, no sordid secrets get out here). One of my parents has often complained that everyone just talks too much on this show, but I think that has always been the point for "Gogo Uta"...more pleasant chit-chat and then some of the enka/Mood Kayo stuff.


I think another purpose for "Gogo Uta" is to provide a nationwide platform which may be less intimidating than "Uta Kon" for up-and-coming singers or singers who need that extra promotional boost. One such guest today was enka singer Naoki Sanada（真田ナオキ）from Saitama Prefecture. He's been performing since 2016, and today he performed his third single from September this year (2018), "Yoi no Blues" (Drunken Blues).

As has been the case for his previous two singles, "Yoi no Blues" has been created for Sanada by enka master Ikuzo Yoshi（吉幾三）, and why I'm writing about it is because aside from the fact that I like it, it also doesn't really come across as an enka tune to my ears although the theme of being at the end of one's rope or at the bottom of the barrel is a typical one for an enka or Mood Kayo song. But come to think of it, there is some of that oomph in Yoshi's melody that would indicate a warrior's call to battle.

Yoshi's lyrics talk about a fellow, perhaps someone who is associated with the underworld, who has just had enough of his life and is drunkenly desperate for a fresh chance to go in a better direction. Perhaps the guy is confessing his sins to the nomiya's proprietor or just blasting himself alone somewhere on the pier while knocking back a One Cup Ozeki (I like sake sometimes but I will never ever go near that stuff again) which kinda strikes me as being Mood Kayo. I've also noticed some of that muscular rock feeling through the guitar. Basically, I wonder if Yoshi has created the 21st-century version of a Nyc Nyusa（ニック・ニューサ）New Adult Music song. New Adult Music is a genre that I actually found out about for the first time earlier this year through his hit single "Sachiko"（サチコ）.


One other thing that I've noticed about Sanada himself is that his movements kinda hinted at a young Hiroshi Itsuki（五木ひろし）and that delivery in "Yoi no Blues" also made me wonder whether he was even incorporating a bit of bluesy Akiko Wada（和田アキ子）. Pretty interesting fellow and song, and I hope either with "Yoi no Blues" or any future song that he gets that breakthrough hit.

Last thing...in the lyrics, Sanada sings that he just can't seem to get drunk no matter how much he knocks back. Considering the "Woe is me" tone of "Yoi no Blues", I kinda wonder whether this would be the ideal kayo for Captain America currently after I had caught the trailer for "Avengers: Endgame".😁
Posted by J-Canuck at 11:42 PM