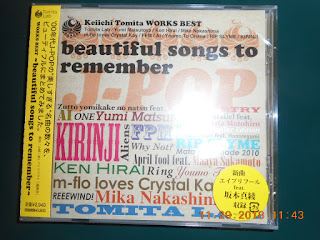 One of my recent acquisitions that I managed to get my hands despite the rotating strikes at Canada Post. I was definitely looking forward to hearing this BEST work by songsmith Keiichi Tomita（冨田恵一）, aka Tomita Lab（冨田ラボ）. A number of songs that have been crafted by him on this March 2011 compilation have already been given their own individual due, but there are still plenty of tracks that have yet to be covered.


Unfortunately, I couldn't find Yumi Matsutoya's（松任谷由美）contribution to the album so we're gonna start off with Ken Hirai's（平井堅）"Ring". His 17th single from November 2002, it was written and composed by the singer with Tomita handling the arrangement, and yep, the Tomita touch of groovy and soulful strings is in there along with some gospel. As you can see from above, "Ring" was the theme song for the NTV drama "Psycho Doctor"（サイコドクター）about a dedicated psychiatrist played by Yutaka Takenouchi（竹野内豊）and looking at that perpetually hangdog expression on his face, I kinda wonder if he needed help.

Hirai had another hit with "Ring" as it went to the top of the charts, going Platinum and becoming the 39th-ranked single of 2003.


m-flo teams up with Crystal Kay for its 14th single, "REEWIND!" and then puts it through the Tomita filter. So we've got the Tomita groove mixed in with the fast-paced tumble-dry style of m-flo. The original single came out in June 2003 and got as high as No. 9, and it's also a track on the group's 3rd album "Astromantic" from May 2004. That album went up to No. 2 and became the 42nd-ranked album of the year.


I had never heard of the acoustic duo Youmou & Ohana（羊毛とおはな）but I'm happy to make their acquaintance through their "falling" which was on their 2nd album "Konnichiwa"（こんにちは。...Hello.）from January 2008. Tomita arranged and produced both song and album, and it looks like he let Kazunori "Youmou" Ichikawa（市川和則）and Hana "Ohana" Chiba（千葉はな）fully show their own sound which I'm happy about. "falling" was originally written and composed by Corinne Bailey Rae, et al with Chiba providing the Japanese lyrics. Sadly, Chiba passed away in 2015 at the age of 36.


Welcome aboard, RIP SLYME! Tomita gave his own layer of glam to the hip-hop group's "Mata Au Hi Made 2010 ~ Tomita Ryu" (Until We Meet Again 2010 ~ Tomita Style) as its 17th single. The original version of "Mata Au Hi Made" was RIP SLYME's final single in November 2000 (lyrics by the band and music by Fantastic Plastic Machine/DJ Fumiya) as an indies unit before making their major debut the following year. The Tomita-arranged version of the song came out in June 2010, and though I'm not a hip-hop fan per se, this one is pretty fun. Plus, I do like the video for a few reasons which include the fact that it reminds me of the trailer for the 50th anniversary special for "Doctor Who". The 2010 version hit No. 10 on Oricon. I will have to take a look at the original version later on.


My final song is Tomita's 6th single "Parallel" (September 2009) featuring singer-songwriter Motohiro Hata（秦基博）, and it seems to make for a fine "good night" song to finish up the proceedings. Tomita composed the song with Takashi Matsumoto（松本隆）providing lyrics, and hearing Hata, he and the song remind me of some of the soulful contributions by Chikuzen Sato（佐藤竹善）and Sing Like Talking. "Parallel" hit No. 11 which makes it Tomita's most successful single to date.

Along with Matsutoya's track, I couldn't find AI's "ONE", but otherwise, including the songs that I had already covered in past articles, I believe that I've provided everything from this BEST compilation by Tomita. Looking at his list of songs that he's had a hand in providing to other artists on J-Wiki, I think, though, there are still many gems to be unearthed, and certainly, I won't be stopping at this album when it comes to him. Incidentally, "〜beautiful songs to remember〜" peaked at No. 77.
Posted by J-Canuck at 4:16 PM