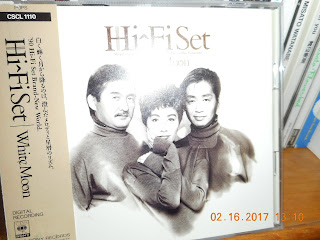 Well, I got together with some fellow translators today at the Touhenboku Ramen branch at Yonge & Eglinton to see this humongous lineup. At first, I internally remarked "Look, I know it's cold today (-6 degrees C) but I didn't expect this many folks for ramen on a Friday!" But then, as I approached, I realized that the queue wasn't for Touhenboku but for the new Fuwa Fuwa Japanese pancake shop just a few shops down. Apparently, it had opened today! I can only guess that the owner of the ramen place was looking outside wistfully and saying "Ahh...yes, I remember when we were like that". But Touhenboku was still doing good regular business.


Anyways, enough about my lunch. At this late hour, I have to make some amends for completely forgetting the fact that despite I had written about Yumi Arai's（荒井由実）"Chuo Freeway", one of the veteran singer-songwriter's many kayo standards, all the way back in 2012, I have neglected to write about Hi-Fi Set's（ハイ・ファイ・セット）cover version since their take has become as much of a trademark tune for the chorus group as it has for Yuming（ユーミン）herself.

One other surprise is that Hi-Fi Set's "Chuo Freeway" was never released in a single (neither A nor B side) but was the final track on their third original album from February 1977, "Love Collection". Now, recollecting my original article for Yuming's "The 14th Moon" album where I wrote about the original "Chuo Freeway", the smooth tribute to her own experience of getting that luxurious drive home from work on the titular highway after midnight, I came to see her version as a fairly dreamy and happy nighttime experience.

However, after listening to Hi-Fi Set's cover of the song, I think just from the vocals and the key change, their "Chuo Freeway" befits a more daytime atmosphere or at least sometime earlier in the evening. The protagonist isn't in the back seat of the car semi-sleepily admiring the view but perhaps is in full control of the car and enjoying a nice afternoon drive. I think both versions are just splendid.


I found this video of Junko Yamamoto（山本潤子）, formerly of Hi-Fi Set, singing "Chuo Freeway" in 2012.

Although I may have mentioned that I have never driven a car in my life and probably never will since I know that I will most likely weaponize a Corolla if I ever get behind the wheel and would automatically enter the Hall of Fame (Shame) on "Canada's Worst Drivers" if I ever get onto the program, there are times after I hear drive-based songs such as "Chuo Freeway" that I wonder about actually enjoying a night drive. I've been side-saddle or in the back getting driven home and the view of the Toronto cityscape from the Gardiner Expressway or while bombing northwards on the Don Valley Parkway is pretty fine. Music like the one generated by Yuming while driving would make a fine companion.
Posted by J-Canuck at 10:49 PM