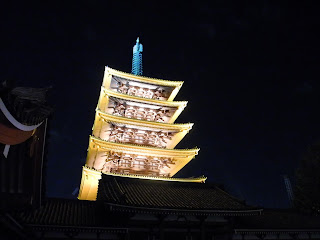 Outside of the upcoming edition of the Kohaku in less than 3 weeks, it looks like the kayo shows are on hiatus until the middle of January or so. Therefore, I guess that I will have to rely on whatever I can find in my collection or on YouTube to see what enka or Mood Kayo I can dig up for the time being.


I did find this chestnut from way back in the 1950s by the late Keiko Matsuyama（松山恵子）titled "Juu-kyu no Ukikusa" (Precarious 19). From the title and the lyrics by Kiyoshi Maki（牧喜代司）, this particular enka tune is about a young woman (or girl, since in Japan, one is not officially an adult until the age of 20) pining for that fellow with whom she had some sort of relationship but is now parted from him, perhaps permanently. Matsuyama's vocals also show that feeling of longing and mourning.

Munetaka Hakamada's（袴田宗孝...still not sure about the reading）melody and arrangement reflects that sound of music that I had always associated with kayo from the postwar era: a studio orchestra reflecting the drama among the backdrop of the surrounding industriousness that Japan was engaging in while getting back on its feet. I could imagine that the setting is on some busy pier by the ocean or even in the rice paddies in a landlocked prefecture. Hakamada also composed Matsuyama's later hit, "O-Wakare Koshu Denwa"（お別れ公衆電話）.


According to J-Wiki, "Juu-kyu no Ukikusa" was released in October 1956 as a B-side to Takeo Fujishima's（藤島桓夫）"Wakai Sendou da yo"（若い船頭だよ...I'm A Boatman!）. I'm not sure of the practice but apparently it was common back then to place two different singers and songs on the flip sides of a 45". For Matsuyama, "Juu-kyu no Ukikusa" became a huge hit for her although she never sang the song on the Kohaku Utagassen for which she would appear 8 times.

One piece of trivia that I could find about Matsuyama is that in her later years, as seen in the above video, she had a tradition whenever she appeared on stage of wearing this huge and heavy gown that according to J-Wiki weighed about 30 to 40 kg. I think with that tiara, she looked like an ageless princess.
Posted by J-Canuck at 8:23 PM