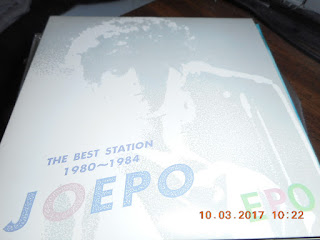 Since the beginning of this blog, the J-Xmas songs that I've put up here have either had themes of just having plain old party fun or just the opposite: being horribly lonely on Xmas Eve. But perhaps folks from other countries who experience their first Christmas in Japan alone may commiserate due to the latter to a certain extent since December 25th isn't a statutory holiday but just a regular work day despite all of the illumination and music around. When I was working at my first English school of NOVA, in fact, I had heard rumours that some other young teachers were absolutely distraught on finding out that they had to work their regular 8-hour shift on Christmas.

Well, it's the lonely theme for this article on EPO's "Juu-ni Gatsu no April Fool" (December April Fool). It's a bit ironic since I've always seen Ms. Eiko Miyagawa（宮川榮子）nee Sato（佐藤永子）as being the singer with the super uptempo touch. Still, I think she's in counseling and encouraging mode here as she sings about a lady who feels as low as can be after going through her first Xmas without her now ex-beau.

Her 10th single from November 1985 and a track from her 8th album "Pump! Pump!" released in June 1986, words and music are by EPO, and I think that she got some inspiration from some 1970s soul for the melody. I can't help but hear some of that Minnie Ripperton and Roberta Flack when it comes to "Juu-ni Gatsu no April Fool".
Posted by J-Canuck at 3:00 PM