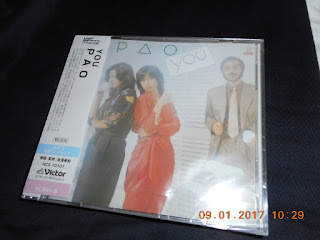 Yup, over a year ago, I actually got my copy of PAO's "YOU" album from 1980 through Tower Records Japan. Before then, I'd still been wondering about the enigma surrounding The Mystery Woman of City Pop, Takako Mamiya（間宮貴子）and in my search, I came across this almost-as-mysterious band that she'd had a connection with back in the late 1970s called PAO.

Not knowing about this group and not seeing (at the time) any videos with any of their songs on YouTube, and not even seeing an entry on them in my "Japanese City Pop", I still figured that if Mamiya had been involved with PAO, then it would have been most likely some sort of AOR or City Pop project. Therefore, I decided to take on a search for this album that I had initially deemed as somewhat quixotic.

Strangely enough, though, Tower Records had reissued "YOU", the trio's lone album back in September 2015, so I didn't hold back and pulled the trigger on my money gun...rather eagerly looking forward to hearing what Mamiya had been up to before her legendary 1982 album "Love Trip".


Well, I will be honest. After my first listen to "YOU", I wasn't particularly overwhelmed in ecstasy at first. Perhaps at the time, I was getting a little bit overly City Popped but it just sounded as if the three members, at least for some of the tracks, were trying a little too hard to imitate The Manhattan Transfer in the delivery of what was primarily English lyrics in a majority of the songs. I think Hi-Fi Set（ハイ・ファイ・セット）and Circus（サーカス）were more accomplished there. As well, I took a gander at that cover on the CD, and just thought "Yeah....I guess folks did wear that sort of fashion non-ironically, didn't they?" Even Toshikazu Kanazawa of www.lightmellow.com mentioned in the liner notes that the one man and two women looked more like a trio of tarento from a Japanese variety show from those days than an actual music group.

However, since then, I've given "YOU" a few more listens and the sound is now coalescing much better in my mind (absence does make the heart grow fonder), and that includes this track, "We'll Celebrate Tonight" which is simply this nice and neat number of living it up in the city (most likely hitting the disco). And despite the 1980 tag on the album, this particular track has a good dollop of City Pop feeling from the 1970s; a bit reminiscent of "Chuo Freeway"（中央フリーウェイ）by Yumi Arai（荒井由実）. Nice guitar by Kenji Ohmura（大村憲司）as well.

Now, the three members of PAO are Sabine Marianne Kaneko（サビーネ金子）, Fumiko Miyazaki（宮崎文子）and Yoshikazu Miura（三浦義和）with Kaneko providing lyrics and Miura creating the melody. Uhhh...where is Takako Mamiya, you are asking? Well, I read those liner notes that Kanazawa had contributed and found out that the mysterious Ms. Mamiya wasn't involved at all in this album. In fact, her only involvement with PAO was on the group's first single in 1978, "Say Yes"（セイ・イエス）. Believe me, I tried to see if that song existed anywhere on the Net, and all I got was Chage & Aska's（チャゲ&飛鳥）hit single of the same name from 1991. However, as a bit of a consolation, the following shows a picture of PAO with Mamiya on the back of the cover sheet of the single (the actual cover only reveals a blonde disco lady). 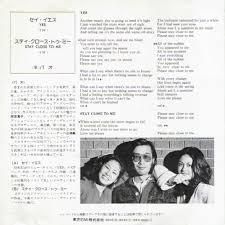 Briefly, I had been semi-convinced that the lady on the left of the cover drinking her coffee pensively was Mamiya, but it's actually Kaneko who had actually first made her mark by being a model in commercials. Sometime between that first single and "YOU", Miyazaki came in to replace Mamiya. Well, so it goes. Although the mystery surrounding Mamiya continues, I've got an album that's also melodiously continuing its way into my heart and mind. 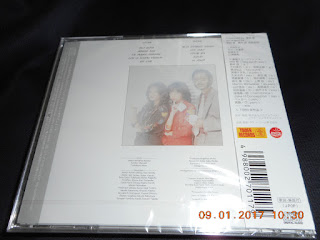