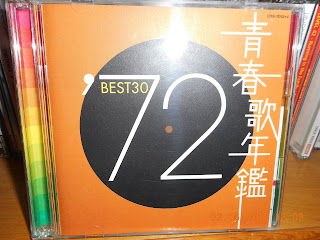 In terms of kayo kyoku, the early 1970s heralded the end of the Group Sounds era, the flowering of J-Folk, New Music and the aidoru of that decade, and those male singers with the big booming voices. For that last category, I guess that there was a love for that handsome serenading figure who could relate his own love for a woman in a way that everyone within several square kilometres could hear simultaneously.


Recently, I found this song which originated in the early 1970s called "Go-gatsu no Bara" (May Roses) that may have become a standard for those epic singers. Written by Rei Nakanishi（なかにし礼）and composed by Makoto Kawaguchi（川口真）, this love song was first recorded by a half-Japanese/half-German singer by the name of Franz Friedl（フランツ・フリーデル）in 1970, although by that point, he had changed his name to Akira Tsugawa（津川晃...hope the first name is correct）. Unfortunately, I couldn't find a copy of that song on YouTube.

However, I did find one for the second Japanese singer to cover "Go-gatsu no Bara". Takashi Shikauchi（鹿内孝）is an actor and singer who was born and raised in the same city where I lived for 17 years, Ichikawa in Chiba Prefecture. One interesting point was that for a time, he was leading the famous group, the Blue Comets（ブルーコメッツ）, a few years before Jackey Yoshikawa took over in 1963. Well, in 1972, he recorded his version of the song as a B-side to his "Kokoro ga Samui"（心がさむい...My Heart is Cold）. Listening to his version, though, it's relatively softly delivered.


A year later, Kiyohiko Ozaki（尾崎紀世彦）, one of those boomers, covered it in his 1973 album "Shinobi Ai"（しのび逢い...Rendezvous）, and true enough, he does unleash his voice to a certain extent in the refrain with some nicely boss horns behind him. The arrangement sounds as if it were paying some tribute to the ballads of the 50s and 60s. The album went as high as No. 37 on Oricon.


I had never heard of Mikio Tsukada（塚田三喜夫）before I came across "Go-gatsu no Bara", and it was his version of the song that I had discovered first. Tsukada was born in Tokyo and is known as a baritone-voiced musical actor. His take was released as his second single in July 1977, and it sounds like the backing music tried and succeeded in one-upping the epic feeling of the Ozaki cover. This version peaked at No. 80.


Of course, when I think about those early 70s boomers, I can't leave out Akira Fuse（布施明）. His cover came out all the way forward in September 1991 as a single, and sure enough, he throws his voice out there like a cannon in the refrain. His version sounds like a combination of the original and a laying-out-on-the-chaise-lounge-by-the-Riviera approach.


To finish off, the great Brenda Lee released her own Japanese-language version in 1972 under the title of "Omoide no Bara"（思い出のバラ...Roses of My Memories）. Her cover was a whole lot more mellower and lilting like a country ballad, and although I couldn't find any information on whether she learned Japanese during her career, I have to say that she sang the song like a true kayo pro.
Posted by J-Canuck at 4:21 PM