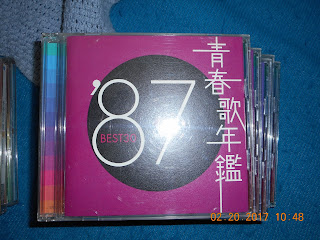 I've got that feeling of entering that amorphous period between Xmas and New Year's Day. There's no longer than holly jolly emotion of the Yuletide but I've yet to get that air of year-end conviviality. There seems to be a holding pattern, so to speak, especially since I'm not at all interested in Boxing Day shopping.


So in a way, it's good that I've got some translating assignments to keep me occupied during this time, and there are the discs from Japan that I've got to listen to, plus a couple of volumes of "Record Collectors" from JTM to devour. Also, "Kayo Kyoku Plus" will always provide some time for me.

Here is this track from Atsuko Nina's（二名敦子）4th album "Fluorescent Lamp" (1987) called "Teibou" (Embankment). It's been classified as a City Pop tune, and it is that, but I think it's also got that arrangement of late 1980s sophisticated pop. Those horns in there remind me of Swingout Sister to a certain extent. Nina took care of both words and music. Would like to explore more of this album, if possible.
Posted by J-Canuck at 7:42 PM