Hello, folks. J-Canuck here to let you know that a few months ago, I wrote about the Japan Top 10 podcast. Well, over those past few months, JTop 10 music director Recca and I have kept in contact and we've decided to do some collaborative work. As she will explain below, some of us here at "Kayo Kyoku Plus" will be contributing some of our favourites to a future podcast while she and William will be contributing some articles on the blog. In any case, enough of me...I will now let Recca take over with her first article on Momoe Yamaguchi. 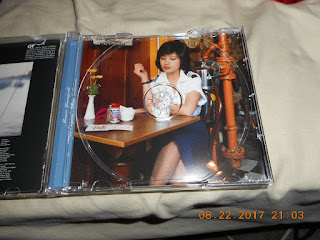 Hey there everyone, Recca from the Japan Top 10 podcast here.  We’re collaborating with Kayo Kyoku Plus on some posts here and a future episode of Japan Top 10.  I’m the music director and a sometimes-host of J Top 10, so I’m popping in to write a guest article.

I like things that “push the limits” of popular media.  TV shows that get as avant-garde as you can while still being commercial.  Children’s movies that go really dark but are somehow still for kids.  Pop songs that go high-concept and weird but are still pop songs.  So, I often boil down my taste in music to “weird pop.”

No one will dispute that Momoe Yamaguchi 山口百恵 is a pop idol.  Who made pop music.  But she had her fair share of strange concept albums during her latter years, right before her all-too-early retirement.   Today’s track, Koi no Hotline (恋のホットライン; Hotline of Love), comes to us from one of those—1980’s Möbius’s Game (メビウス・ゲーム).  The album’s tag line boils down to something like “Momoe’s infinite wonder world.”  And what a wonderful world it is.


But the album’s high-concept “wonder world” really kicks in with Track 5, Apocalypse Love (アポカリプス・ラブ), and its dark and Biblical apocalyptic imagery.  Momoe is the queen of Babylon, watching over her crumbling desert empire, wailing plaintively 「泣かないで」(Don’t cry) as she illustrates the end of days.


That song bleeds directly into the next, Techno Paradise (テクノ・パラダイス), speeding up into the frenetic disco climax that is my featured song today, Koi no Hotline.  I can’t say enough about this song.  That driving disco bass line punctuating the gaps between lines of the verses gets my blood pumping.  It’s got a hint of the retro rock n’ roll from the first few tracks of the album in the backing vocals, but there’s no question, we’ve definitely entered Momoe’s high-concept disco wonder world by this point.  This song is a sexy tune about desire and Momoe knows what she wants.


The song ends all-too-suddenly, slowing down and bleeding into the next track, the electronic-infused funky One Step Beyond (ワン・ステップ・ビヨンド).  Then it’s onto E=MC2, likening love to an equation in another example of the album’s electronic future visions transposed to a pop soundtrack.  We end with the mournful string-driven Violet Rhapsody (ヴァイオレット・ラプソディー), Momoe breathy and wistful after our trip through time and space.

The Momoe on display for most of this album is my favorite Momoe.  It’s the same no-nonsense badass lady speeding down the highway in Playback Part 2 and showing up unannounced to turn a love triangle into a Mexican standoff in Zettai Zetsumei.  These have often been referred to as Momoe’s “punk” songs.  The kind of songs that get yells of “kakkoii!” (“So cool!”) at karaoke, if you can do a half-decent job of channeling your inner Momoe.


While nothing on this album approaches the technopop that would come into full bloom in the years surrounding its release, it’s a fun dash of electronic instruments, disco, and apocalyptic future visions in the career of “Momoe-chan.”  What a transition from her 1970s teenage idol tunes to this mature, sexy, and transcendent figure.

I didn’t discuss every track on this amazing album, so I highly recommend checking it out for yourself.  I picked up my CD copy in Japan, but it’s easily available online as well.  And, of course, please keep an eye on Japan Top 10’s feed for our future collaboration episode with Kayo Kyoku Plus!  If you enjoyed my commentary here, you might want to check out some of the past Japan Top 10 specials I’ve hosted, covering themes like ‘80s J-pop, the best-selling J-pop songs of all time, J-pop songs from pro wrestling, and many others.
Posted by J-Canuck at 2:21 PM