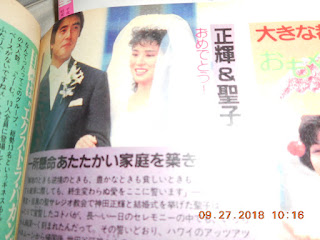 Following my trip downtown for Xmas shopping on what has been called the busiest shopping day of the year (actually, getting there at 11am meant that there was very little wait for the cashier...ha, ha), I was still plenty pooped, especially after engorging enjoying a juicy and buttery Porcetta Cubano sandwich down at the St. Lawrence Market. I just decided to not bother with any other translation work and plopped myself down on the bed and watched Turner Movie Classics.

Yep, watching old movies is a hobby of mine, although not nearly as big as my love for kayo kyoku. I managed to catch this 1939 flick called "The Ice Follies of 1939" starring James Stewart and Joan Crawford. This was intriguing for me since I hadn't even heard of Jimmy and Joan in a flick together. Well, I later found out tonight that the movie hadn't been particularly well-reviewed then and even now. Basically, there were words such as terrible.

Well, perhaps the two stars probably wished that no one had ever heard of this one either. Nope, I didn't think it was all that great which made the movie all the more curious since I've been accustomed to seeing those two and Lew Ayres in pretty good-to-legendary pics. In a way, I would compare it to Hollywood's attempt at the superhero movie "Green Lantern". That movie suffered badly from not knowing what it wanted to be...something fairly comedic like "Ant Man" or a straight-ahead adventure with an epic villain like "Spiderman 2". "The Ice Follies of 1939" had some pretty discordant scenes of darkness and madcap comedy, plus a surprise to me in that the last 10 minutes (the above scene) of the movie were filmed in Technicolor a la "The Wizard of Oz", which was also released in the same year.


All that preamble with that cinematic analogy to explain my feelings for this Seiko Matsuda（松田聖子）song "Glass no Prism" (Glass Prism). As with Stewart and Crawford, I have known the Queen Aidoru of the early 1980s for decades along with her biggest hits, and as with "The Ice Follies of 1939", I had never heard of this song until a few months ago despite the star behind the mike.

Very happily, my reaction was much more positive to this lovely song which was the B-side to Seiko-chan's 18th single from August 1984, "Pink no Mozart"（ピンクのモーツァルト）. The reason that I had never heard of this was that along with the fact that I had never purchased the single, "Glass no Prism" never showed up on any original album and appeared only on her BEST compilations. It was just my misfortune that it hadn't been included in the BEST albums that I do possess.

As with the perky "Pink no Mozart", "Glass no Prism" was created by a couple of vets from the band Happy End, Takashi Matsumoto and Haruomi Hosono（松本隆・細野晴臣）, and like it, it has this really quirky and appealing arrangement of its own, thanks to Masataka Matsutoya（松任谷正隆）. Starting with this ethereal and poppy chorus and this music partly seasoned with sax that seems to propose something wonderful coming over the horizon, Seiko-chan sings this bouncy tune as if it were something for Christmas in a toy store. Then the string-led refrain sweeps in with great tidings like a brisk and refreshing wind. The lyrics are one girl's musings about this love triangle (the prism) that is forming with her as one of the "corners", and it sounds like she's relishing the situation. However for me, it's all about that arrangement.

Will always cherish digging away at the history of Japanese popular music and discovering something old that is new to me again and again.