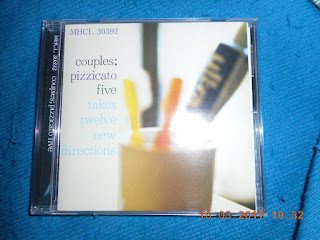 Going way back into my memories, there are a few very early ones that I still miraculously retain. One would be crawling around on all four on the wooden floor in a family friend's house, and another would be seeing a "Hockey Night In Canada" broadcast on the CBC on the ancient black-and-white TV in our very first apartment.


My early memories also include musical ones, as well. One of the earliest songs that I remember hearing and liking was "All You Need Is Love" by The Beatles, and it is the one that I will always first associate with The Fab Four.


Another one is "The 59th Street Bridge Song (Feelin' Groovy)". Being only around 2 years old at the time, I certainly couldn't retain knowledge of the whole title but I did keep "groovy" in my head. It was such a happy tune that I could imagine that a lot of toddlers reacted to it like candy. But it wasn't the original by Simon & Garfunkel that I loved, and in fact, I only heard the original for the first time just a few months ago and was surprised at how short it was. Nope, it was the 1967 cover version by Harpers Bizarre with that woodwind section. "Feelin' Groovy" was categorized as a sunshine pop song, a genre that I hadn't even been aware of and that was the label which was put onto the band also.

In any case, hearing it again after so many decades, I realized that even the Harpers Bizarre version was also pretty short and kinda reflected what seems to be a very innocent age. At the most basic level, it's such a happy ditty.


So when I heard that Pizzicato V (as it was written back in the band's early days) had also recorded a cover, I first assumed that these would be the guys to cover something like "Feelin' Groovy". But then I discovered that their Japanese-language version had been recorded as an addition to their very first single "The Audrey Hepburn Complex" back in August 1985, and remembering that song, Pizzicato V hadn't taken on that familiar Shibuya-kei sheen quite yet. It was more of a quirky technopop unit with Mamiko Sasaki（佐々木麻美子）as the lead vocalist.

And sure enough, Pizzicato V's take on one of the earliest songs that I could remember is more of a light and spacey version with some snappy percussion, to boot. Instead of go-go boots and mini-skirts, I envisage space boots and rocket packs. But dang, although it still retains that short time, it's also quite catchy with Masami Ogura's（小倉雅美）Japanese lyrics in place. The song is also on the band's first BEST album "Pizzicatomania!"（ピチカートマニア!）from July 1987.
Posted by J-Canuck at 7:56 PM