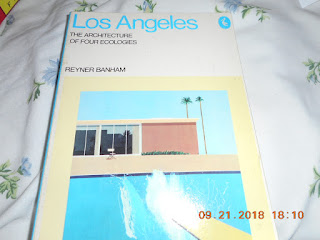 I figure that I can come at this song from a variety of angles, so allow me to start with the personal one first. The above photo is of an ancient reference book from my Urban Geography class back at U of T on the older architecture of Los Angeles. In all honesty, I've forgotten how the architecture of one of America's largest cities came to apply to the work in this course, the content of which I have completely forgotten. Still, I remember the book, that I dug out from deep within one of the many boxes of stuff recently, as having some nice photos of buildings and the narrative wasn't too egg-headed so I may actually peruse it once more before I hit bed tonight.

The second angle for this tune is something that I will begin with a question. What is a recent YouTube video of a Japanese pop song with an older style of rhythm and style that has become hugely viewed? Of course, Mariya Takeuchi's（竹内まりや）"Plastic Love" is one answer but that's already been covered here.


And in fact, this song, DA PUMP's "U.S.A." has actually far outstripped that video of "Plastic Love" (which currently has 7 million views) by going beyond 70 million views in the four months since it was uploaded by Avex.

I first saw "U.S.A." on a recent episode of NHK's "Uta Kon"（うたコン）, and I was left initially confused because this was DA PUMP, which had been one of the cooler and popular song-and-dance groups of the late 1990s in Japan, and they were actually doing a Eurobeat song which sounds as if it had come from the dusty song list of the "Dance Dance Revolution" game while doing a somewhat cool/cornball dance routine that, according to Wikipedia, includes the dab, the Milly Rock and the Shoot. Maybe one of them was that M.C. Hammer move I saw.


A lot of this blog has been me getting all rather nostalgic about the music of my childhood, youth and young adulthood, and I have to admit that I was getting some sepia into my vision as I found myself bopping my head about...and no, I didn't do that dance. I do remember the M.C. Hammer days, the DA PUMP days, and the days when my old friend used to practice like the Dickens on his "Dance Dance Revolution" mat.

Yup, "U.S.A." has become an unlikely hit of the summer, breaking into the Top 10 at No. 9 after its release as the group's 29th and most recent single in May this year, and it'll probably get DA PUMP back into the Kohaku Utagassen in a few months.

The thing is that "U.S.A." is a cover version of an original 1992 Eurobeat tune with Italian singer Joe Yellow. Cirelli Donatella and Lombardoni Severino wrote the original lyrics with Accatino Claudio, Cirelli Donatella and Gioco Anna Maria whipping up the melody. Lyricist and producer shungo took care of the Japanese lyrics.


I think that I was talking about angles all the way back at the top, eh? Well, Angle No. 3 is the dance which apparently has taken Japanese pop culture by storm. It's even earned the name "Ii ne Dance" (いいねダンス...Good, Ain't It Dance). Once in a while, certain dances have become the trendy thing for a good chunk of the year in Japan. There was the Lambada while I was on the JET Programme, and then a couple of years ago, a lot of folks were agog about the Koi dance which accompanied Gen Hoshino's（星野源）hit "Koi"（恋）.


Still at the end of it all, though I've started to succumb to the charms of "U.S.A.", I have to say that I cannot abandon my Mariya! Now, if "Plastic Love" can earn some cool choreography.
Posted by J-Canuck at 8:23 PM