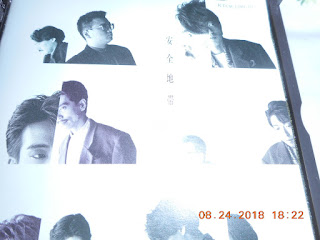 Well, it isn't exactly early August now, but I did promise to bring Side 2 of the "Friends" LP portion of Anzen Chitai's（安全地帯）mammoth undertaking "V" from December 1986 at that time. At least, I still got it in within the month itself. Side 1 has been up since July 24th.

The original Side 2 began with a brief and lonely instrumental version of "Friend" that I had talked about in the very first article on "V" that I created back in 2012, but then it goes into the darker and introspective "Chigiru Night"（チギルナイト）. I'd always wondered what that title meant and a part of me rather darkly, as it were, thought "Chigger Night" which of course had me going "Ick". The last thing anyone needs on the mattress is a horde of biting chiggers.

But then I checked out good ol' Jisho, and I found out that chigiru（契る）can mean "having sex". Well, that would be a great improvement over having to grab a can of Raid. Still, there doesn't seem to be any sort of romanticism in this particular song created by vocalist Koji Tamaki（玉置浩二）and lyricist Goro Matsui（松井五郎）. There is quite a bit of urgency and mystery, though.

Then, we come to "Kowarerushikanai"（こわれるしかない...Gotta Break It） which brings back some of that old Anzen Chitai sound and maybe even a soupcon of Beatles near the end. With the background of crickets sounding off in the background, it's another fairly serious song about a breakup that is inevitable and cold to the touch. Love isn't always a fun thing, apparently.

"Fushigi na Yoru"（不思議な夜...An Odd Night） has Anzen Chitai's brand of bossa nova with a synthesizer or some contraption making like glass bottles. It all sounds rather woozy after a night of carousing with the final destination being bed. Tamaki's vocals especially have a certain sinister and sneakily tempting tone as if the man himself were offering a Faustian deal to a fellow who has a little too much romance on the mind.

"Yakusoku"（約束）already has its own entry and as I mentioned there, it's a summer sunset sort of a song with plenty of mellowness. The following track also hints at happier themes compared with the first few tracks of this side. The romantic "Omoide ni Tsutsumarete"（想い出につつまれて...Wrapped in Memories） was actually used as the commercial jingle for Osaka Gas portable heaters, but aside from that point, the song is another example how Tamaki's falsetto can send any listener into rapture. Y'know, if "Chigiru Night" is about plain ol' sex and "Kowarerushikanai" is about the ugly breakup, "Omoide ni Tsutsumarete" can just be the melodic equivalent of snuggling up close. Incidentally, the song was also Side B for Anzen Chitai's hit "Suki sa"（好きさ）.

The final track is "Kioku no Mori"（記憶の森...Memory Woods）, a short ballad but one of the most beautiful that the band has ever created with the piano phrasing and then the entry of some epic strings. And Tamaki has never sounded so gloriously haunting through his vocals as he describes gradually being unable to remember many things as time passes except for that one kind voice in his heart. I can imagine a ballet or some form of contemporary dance being set to this song.

Generally, I think Side 2 of "Friends" has more of that exploration into the sadder and darker places of the heart but with some glimmers of hope. It makes for an interesting juxtaposition with Side 1 which had that party hearty atmosphere for the most part. Anyways, the next entry in "V" will be Side 1 of the "Suki sa" LP.