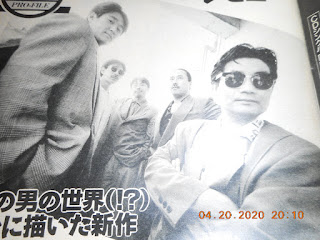 Perhaps a tad early before the usual urban contemporary Friday but hey, why not? And I wouldn't say that Stardust Revue's  (スターダストレビュー) "Danger Lady" is a straight-up City Pop tune...I think that it's more in the jazz-pop range with the synthesizers standing in for all of those Big Band instruments.

A track on the band's July 1988 album "Rendez-Vous", this synth-jazz piece was composed by Stardust Revue keyboardist Yasuhiro Mitani（三谷泰弘）, the same fellow who would come up with the classy and summery "Natsu no Jou" （夏の女王）. However it is indeed the distinctive vocals of Kaname Nemoto（根本要）behind the mike for "Danger Lady" which sounds like a kissing cousin to Anzen Chitai's（安全地帯）"No Problem" which saw the light of day in the same year. Maybe Japanese bands were getting into their synth-jazz phase at the time, perhaps? The lyrics, by the way, were provided by Masako Arikawa（有川正沙子）.