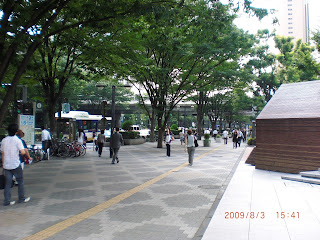 The above is the boulevard going toward the hotel district of West Shinjuku and all of those skyscrapers. I took that photo back a dozen years ago, and I'm sure that it was blisteringly hot back then as it is now. As such, I was grateful that there were always a few vending machines of drinks every few hundred metres.

Ah, yes...the typical summer festival scene in anime. It can be the ideal setting for romance to blossom. In the nearly ten years that I've been back on the anime kick, the summer festival seems to wend its way into an episode in many a show. During my life in Japan, I've been to a few myself but alas and alack, romance didn't exist for me there but the many different kinds of food made for a fine consolation prize.

It's just the introduction that I needed for "Summer Love". From that title, one would expect a band like TUBE or Southern All Stars（サザンオールスターズ）, but actually this was a song originally recorded by the late Kiyohiko Ozaki（尾崎紀世彦）and his wonderful boomer of a voice. His 28th single from March 1987, it's a wistful ballad that is a bit reminiscent of some of those old summery tunes from the 1960s. Daisuke Inoue and Norio Maeda（井上大輔・前田憲男）helped in the melody and arrangement while Rei Nakanishi（なかにし礼）came up with the usual lyrics of the warm love in the hot season. The song peaked at No. 34.

Strangely enough, "Summer Love" was something to be covered within the same year. In fact, one interesting singer behind the mike didn't have a microphone in his day job; it was more a golf club. Yup, another Ozaki...this time, professional golfer Masashi "Jumbo" Ozaki（尾崎将司）...covered and released his "Summer Love" in 1987. And crazily enough, he's not bad at the singing thing; he's even come out with three more singles and an entire album.

Ozaki and another famous Japanese golfer, Isao Aoki（青木功）, appeared together on a commercial for Asahi Beer, but it was actually the original "Summer Love" with Kiyohiko Ozaki playing in the background. I wonder if Hideki Matsuyama（松山英樹）has a good set of vocal cords.

Even enka singer Shinichi Mori（森進一）, who's been no stranger to the poppier side of music, covered "Summer Love" in his 1987 album of covers "Kanashii keredo..."（悲しいけれど...I'm Sad, But）.

But let's leave this article with the original singer. Here's Ozaki performing "Summer Love" with composer Daisuke Inoue accompanying him.