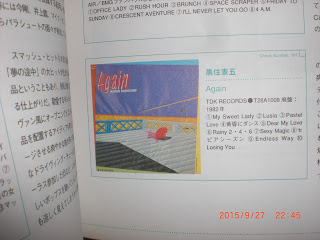 It's almost been a couple of years since I've had singer-songwriter Kengo Kurozumi（黒住憲五）up on the blog as a performer. The last song that I've covered by him behind the mike was "Lusia", the B-side to his 1982 single "My Sweet Lady".

This time, the Kurozumi file is being added through his "Moonlight Serenade", and nope, this has nothing to do with the jazz classic by Glenn Miller. A track on his 2nd album "Still" (1983), "Moonlight Serenade" is a very different animal which is still in his wheelhouse of bouncy party-atmosphere City Pop with AB'S member Yoshihiko Ando（安藤芳彦）providing the lyrics. It's got those soaring strings for a bit of that sophisti-pop taste but at the same time, there is also a Tats-friendly sax solo and bass that makes me wonder whether the setting for the song is some bayside hotel...with a full moon out, of course.

Although his album releases started in the 1980s, Kurozumi did release a couple of singles in the 1970s and there is his output as the vocalist of the band Boomerang（ブーメラン）in that same decade. Unfortunately, none of his works back then are available on YouTube as of yet.