The Carpenters -- Yesterday Once More 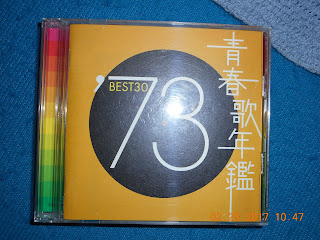 Almost to the day a year ago, I wrote up a Reminiscings of Youth article on Carpenters' "Close to You", arguably one of the most well-known songs by the sibling pop duo of Karen and Richard Carpenter from 1970. Naturally, hearing Carpenters songs on the radio while I was a kid was par for the course.

When I first went to live in Japan, I soon realized that the Carpenters had even more fame and love in the country of my ancestors than in the United States. In addition to the usual hits, I even discovered a song by them that I hadn't heard before, shockingly enough. And that song was "Yesterday Once More". It was originally a Carpenters single that was released in May 1973, but the first time I heard it was as a the theme song for "19xx Bokutachi no Natsukashii Melody" （僕たちの懐かしいメロディー）, a late-night (or early-morning) Fuji-TV series that quietly showcased some of the oldies from Japanese pop. I remember catching it as I shivered underneath my futon in the wintry depths of Gunma Prefecture in 1990. There was nothing like the velvety voice of Karen to keep me warm before the kayo poured out. Ironically, videos of the show on YouTube have now garnered a lot of nostalgic feelings for it, a show that had been produced to display the nostalgic songs in the first place.

Y'know...if there were ever a theme song for the ROY articles or for the blog in general, it would be "Yesterday Once More" since the vast majority of the entries here is all about the nostalgia and good ol' days of music and kayo. The whole song sounded nostalgic even when it was first released in the early 1970s, and I've found out that this was totally intentional according to the Wikipedia article for the song since it goes along the 50s progression chord that was all the rage for songwriters back in the 1950s and early 1960s. Apparently one of the number of nicknames for it was the doo-wop progression.

I've found out over the years since watching "19xx" that "Yesterday Once More" has also been a popular karaoke tune to be warbled among the students that I've had; it's up there with "Top of the World" and the aforementioned "Close to You". To be honest, I've had a go with "Yesterday Once More" a few times myself at places like Karaoke Kan and Big Echo with varying results.

Furthermore, according to that Wikipedia article, the song hit No. 1 on the Billboard Easy Listening chart and has become the Carpenters' biggest-selling single worldwide, so I've definitely been missing out on some information there. And it doesn't hurt that Richard has stated that "Yesterday Once More" is his favourite creation. For me, though, no matter how much I listen to it, I will always think of it as the theme song for "19xx".

So what were the singles that got released in May 1973?