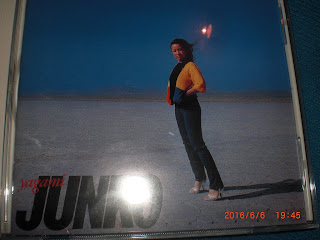 Here I was...ready to put up a fresh new article on Junko Yagami's（八神純子）"Secret Love"（シークレット・ラブ）, another wonderful song by the singer-songwriter from Nagoya with that incredibly soaring voice, and talk about all the great things about it. Then, I realized that I had already given my two (non-existent Canadian) cents on it back in July 2018. Well, I have pulled off goofs like that before by providing articles on songs that I had already written but forgot about. To be honest, I have never had the heart to pull down the so-called unnecessary second versions since I may have plugged down some different insights there. Still, I won't put down copies if I can help it.

And yet, I was still itching to put up a Yagami song. Luckily, I was able to find this 11th single of hers, "I'm a Woman" which was a trackmate of not only "Secret Love" but also "Ichi-nen Mae no Koibito"（一年前の恋人）on her February 1982 album "Yume Miru Koro wo Sugite mo"（夢みる頃を過ぎても...Even If The Time to Dream Passes）. The album was another hit for Yagami as it peaked at No. 2 on Oricon and ended up as the 34th-ranked release for the year.

I'm also quite glad that I did go ahead with "I'm a Woman" because I remember that this was a song that I have heard before on her BEST compilations but had never had the opportunity to jot some stuff down about. Moreover, "I'm a Woman" which was composed by Yagami is quite different in tone from its two other City Pop trackmates that have been mentioned up above since it's got more of a rock feeling or perhaps I can call it the raunchier extreme of West Coast AOR.

First off, as a single, "I'm a Woman" was released in March 1981 and what I like about it is the harmony involved in the verses and then the electric guitar screaming in for a landing. There's something quite suspenseful in the lyrics by Sonomi Ari（阿里そのみ）which deal with a woman who doesn't suffer men gladly and is more than happy to be in control. One remarkable thing that I've also noticed is that from Ari's lyrics and Yagami's delivery, "I'm a Woman" could have been a great song for 70s superstar aidoru Momoe Yamaguchi（山口百恵）to tackle if she hadn't retired the year before. A lot of Yamaguchi's later hits in the late 1970s dealt with world-weary women wrapping fellows around their well-manicured pinkies, but perhaps "I'm a Woman" is a tad different in that I don't think the protagonist in the song is world-weary at all but is someone happily relishing being at the height of her powers.

Anyways, enough proselytizing from me. "I'm a Woman" peaked at No. 17 on Oricon. It was also used as a jingle for the Yamaha NS-460 which I'm assuming is a stereo? I couldn't find any sign of the commercial on YouTube unfortunately.