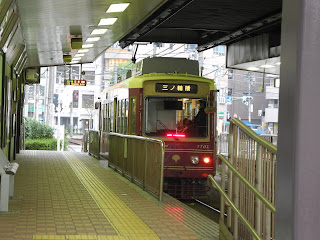 First off, I would love to know where that café is. Secondly, that must have been one laid-back video shoot. Capsule vocalist Toshiko Koshijima（こしじまとしこ）does her singing in that Pan Am flight attendant outfit with an orange fetish and then she can sit down for a bit of lunch with whom I assume is her partner and songwriter Yasutaka Nakata（中田ヤスタカ）. But then again, it was all about the breezy life in the early years of the duo, wasn't it?

The last time I wrote about capsule was about 2 1/ 2 months ago in mid-June with their most recent production "Hikari no Disco"（ひかりのディスコ）, a tribute to those 1980s and Vaporwave. Well, I'm heading back to February 2004, when capsule was more about the Shibuya-kei rather than the EDM. I have here their 7th single "Retro Memory".

Let's bring out those martini glasses, shall we? Naturally written and composed by Nakata, "Retro Memory" has all of that wonderfully swinging French jazz and Koshijima's kittenish vocals to take us on that nostalgia trip. The vocalist is giving her thanks and farewells to all those old lovely memories before heading back to the present. However, there doesn't seem to be anything maudlin here. Everyone had their fun time but all good things must come to an end and all that, and there are no regrets. Head back home with a skip.

"Retro Memory" hit No. 50 on Oricon and the song was also a part of capsule's first BEST album "Flash Best" which came out in August 2009. It hit No. 7 on the charts.