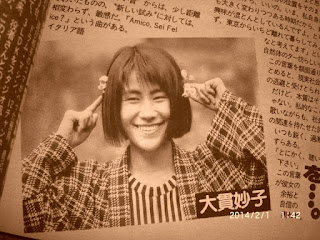 Considering that a lot of my focus on singer-songwriter Taeko Ohnuki（大貫妙子）has been on her 1970s and 1980s works through her New Music, City Pop, synthpop and baroque pop creations, it's always nice when I encounter and can write about her more recent material.

Case in point: her contribution to the soundtrack of the anime motion picture, "Cider no Yō ni Kotoba ga Wakiagaru"（サイダーのように言葉が湧き上がる...Words Bubble Up Like Soda Pop）. A rom-com feature starring some big seiyuu such as Natsuki Hanae（花江夏樹）and Maaya Sakamoto（坂本真綾）and actress Hana Sugisaki（杉咲花）, it was supposed to have been released last May but COVID-19, as it has for many movies, kept pushing back the release dates until it finally came out only a few weeks ago in July.

In any case, Ohnuki wrote and composed "YAMAZAKURA" (Mountain Cherry Blossoms) as this caressing love song about reminiscing when one of the characters fell head-over-heels at a live house, and how a nice walk through the cherry blossoms next spring would be just the thing. Near the end of the song, Ohnuki refers to Cherry Coke, a drink that I could find much more easily in Japan than over here in Toronto. Considering that a main character is nicknamed Cherry as a pun on his real last name, Sakura（佐倉）, I could imagine that the young lad is being symbolized as that beloved drink.

I think when it comes to Ohnuki's songs in recent times, my impression is that they have been more of the comforting tunes such as "YAMAZAKURA" with the lilting guitar and the tender piano. Of course, that's perfectly fine with me. We could use some more of that relaxing music during these times.