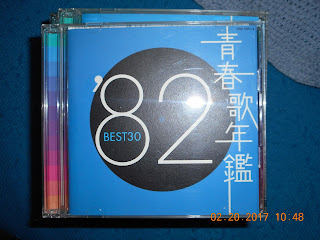 As mentioned in my last article, I got together with City Pop expert Van Paugam in a podcast earlier this afternoon to talk on some of the works of the late Miki Matsubara（松原みき）, and those included her first six albums released in the 1980s during her career. I had a chance to go through those albums and one of them was "Myself" which came out in March 1982.

Curiously enough, I don't think that I had ever chosen a track from this album for the blog before so this would indeed be fresh territory. And good territory as well since I enjoyed almost every track on "Myself". In fact, arrangement and performance of all of the tracks were done by the American fusion band Dr. Strut, a group of session musicians from both the East Coast and West Coast who formed up in 1977 to push some envelopes. They enjoyed a good deal of popularity in Japan, apparently, and so they got the gig for "Myself" and for Matsubara's previous album "-Cupid-" in 1981, Dr. Strut had been the backing band for the Side A tracks.

Track 2 is "Sannin de Odoranai" which literally translates as "Three Don't Dance" but perhaps I could posit that it means "Three's A Crowd". From what I could understand of the lyrics by Kazuko Kobayashi（小林和子）, one "corner" of the love triangle has a major decision to make to revert this shape back to a line segment. The music is provided by singer-songwriter in the City Pop field Issei Okamoto（岡本一生）. He and Dr. Strut create a nicely refined number with a moody intro and a fairly cheerful main melody with a touch of Latin class. There may be a painful rejection taking place but it's happening in the background of some cool music. However, there is also a sudden injection of an upbeat jazz interlude thanks to Dr. Strut's David Woodford and his honey-toned sax.