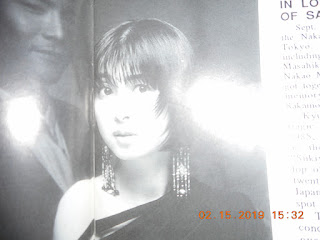 Man, I know that Naoko Kawai（河合奈保子）was one of the premier aidoru of the early 1980s but she also did have that desire to try some of the more refined champagne stuff in terms of music. I'm talking about a couple of albums that she released: "Daydream Coast" in August 1984 and "9 1/2" in December 1985. Regrettably, I have yet to purchase the former album but I got a very nice tasting through Kawai's duet with the David Foster on one track "Live Inside Your Love".

Now, I'm having a major gulp of another track on "Daydream Coast", "Home Again, Alone Again", which I gather from the title is a most bittersweet tune of being a solitary being once more. However, the arrangement is so lush and creamy like a chocolate éclair that it just reminds me of the AOR/soft rock that I used to listen to in the late 1970s/early 1980s on that pink SONY radio on the dining room table.

Synthesizer programmer/guitarist Erich Bulling and percussionist Ralph Johnson were behind the creation of "Home Again, Alone Again" as they were involved in the overall recording of the album with keyboardist Randy Kerber handling the arrangement. Prolific lyricist Masao Urino（売野政男）provided the Japanese words to the song.

Just marveling about how smooth and refined the song sounds, as I did for "Live Inside Your Love", I've left the aidoru tag off this time for Kawai. Although I have used that tag and the one for J-AOR or City Pop for some other singers, "Home Again, Alone Again" is a tune that I can only describe as a dreamy West Coast ballad that could easily be placed on an American AOR compilation. There was frankly no way that this particular track or the whole album could come out otherwise considering the folks who were involved here if you take a look at the Tower Records site selling "Daydream Coast".