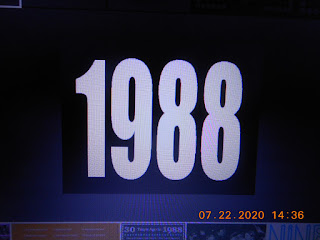 I only heard of the manga-turned-anime "Earthian"（アーシアン）from my anime buddy in passing but never saw a single scene from the series. Apparently it's quite the yaoi fantasy story, though.

What caught my ear here regarding "Earthian" is one of the tracks from the first of the three "ORIGINAL ALBUM" soundtracks for the series. There is also a "Complete Vocal Collection" to throw in for the music behind the anime so it is rather reminiscent of the many albums that have been created on behalf of popular shows such as "Kimagure Orange Road"（きまぐれオレンジロード）.

As for that particular track, it's "HANASANAI" (Never Let You Go) by the pop duo Milk. The fact that I could find another song on YouTube by this obscure sister act is one reason that got me to talk about this one. Another reason is that "HANASANAI" is a fine example of late 80s City Pop encircling a major downtown neighbourhood such as Shinjuku...plus it's got a screaming electric guitar solo. That opening synthesizer thrum hooked me right there and then there are the vocals by Ritsuko Miyajima and Rie Miyajima（宮島律子・宮島理恵）. Strangely enough, when they croon out some of the lyrics, the delivery reminds me of future hitmaker Kohmi Hirose（広瀬香美）, although her voice is a fair bit higher.

If I've read the description below the video correctly, Rie Miyajima was behind words and music. I also would like to mention that City Pop singer-songwriter Kingo Hamada（濱田金吾）took care of the production for "ORIGINAL ALBUM 1" which supposedly came out in July 1988 according to Discogs.