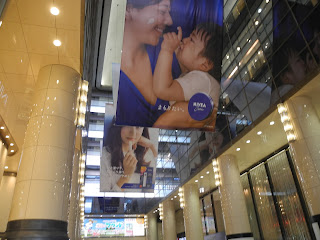 Sheepish J-Canuck here. Sheepish because up to now, the only article written up on eclectic singer-songwriter Mimori Yusa（遊佐未森）was February 2013 when nikala contributed Yusa's "Kureteyuku Sora wa" (暮れてゆく空は). Nikala herself mentioned in that article that "...Yusa only enjoyed mild popularity, since her music and lyrics were considered eccentric by mass audiences". And yet, there was a fairly sizable flood of fresh unusual acts coming out in the final few years of the 1980s when she debuted such as PSY-S, Tama and Jitterin' Jinn, and I've liked all those and more. So allow me to rectify.

At the end of her article, nikala also introduced "Chizu wo Kudasai"  (地図をください...A Map, Please) which was Yusa's 3rd single from February 1989. Well, I have the coupling song from that single, "Hoshikuzu no Platz" (Stardust Bus Stop), and the pop melody by Takafumi Sotoma（外間隆史）was probably like a breath of fresh air for those listeners who were perhaps getting a tad tired of all of the heavy synthesizers and electric guitars at that time. Both Yusa's vocals and the arrangement are very organic and airy for a lack of better terms.

The lyrics by Junko Kudo（工藤順子）seem to relate the beginning of a fantastical trip to isekai through the usual route of an attic with a mysterious trunk...leading to a magical bus stop(?), and Yusa is trying to invite us all on the voyage. I gather that the video above of her performing "Hoshikuzu no Platz" was from the same NHK program that featured "Chizu wo Kudasai" as shown in nikala's video, and I think that the whole setup including Yusa's outfit is very reminiscent of PSY-S' presentation, although again anything electronic is very much subdued.