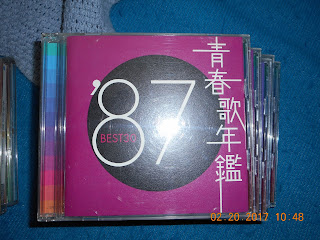 I think the only thing missing from this song is a cold glass of Hawaiian Punch. But then again, listening to the melody, that would be inaccurate since there are those synthy Caribbean steel drums in there. Regardless, this is a happy-go-lucky tune.

Not only that, "Furimuite My Darling" (Look Back, My Darling) was an insert song for a couple of episodes of the famed 80s anime "Kimagure Orange Road"（きまぐれオレンジ☆ロード）. Performed by actress Minako Fujishiro（藤代美奈子）, this was her second and final single released in September 1987, and although the singing makes this sound rather aidoru-ish, the actress label is the only one attached to her so I've just categorized "Furimuite My Darling" as the poppiest of pop songs.

I have only seen bits and pieces of "KOR" so I don't know in what context "Furimuite My Darling" was used in those two episodes, but I can only imagine that it could have been utilized for those quintessential beach scenes. Shiro Sagisu（鷺巣詩郎）was responsible for the melody while Ryu Sawachi（澤地隆）took care of the lyrics. As for Fujishiro, her acting career didn't last all that long either with it lasting between 1986 to 1994.