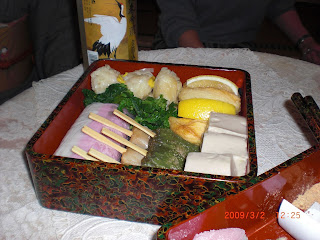 Among all the photos that I could dig through so far, this box of goodies was the only one where I could even spot a literal sliver of lemon.

Indeed it's the stylized version of the famed citrus fruit that is the topic and title of this article. "le:mon" is a track from this October 2017 full release, "INSHOW-HA wa Kimi ni Toikakeru"（印象派は君に問いかける...INSHOW-HA Would Like To Ask You a Question） by the musical duo INSHOW-HA（印象派）. Their name translates into "The Impressionists", and certainly they do leave quite the impression. INSHOW-HA reminds me of that other female duo, the techno-rap unit Charisma.com, in that the two ladies there, MC Itsuka and DJ Gonchi, started out as company employees who decided to get their stress out by becoming performers. Osaka-based MICA and miu also jumped from the corporate ladder to the world of music in 2009 and have come to bring their form of loopy techno-rock to the masses.

Supposedly, the duo's music videos have also garnered a lot of attention, and "le:mon" is no exception as MICA and miu (the latter having provided words and music) play very stoic and leggy figures doing their weirdly best around various tourist sites in Japan. I'd say that the video for this one would have gotten onto our local unusual music video show here in Toronto, "City Limits", without a problem. miu's melody fairly floods all around you with the beats and the guitar growls while the ladies' vocals alternately fly up whimsically and head down to flat ground.