Not quite a month ago, I put up an article talking about J-AOR crooner Junichi Inagaki's（稲垣潤一）6th BEST compilation album from December 1990, "TRANSIT". Because of the two discs containing oodles of his past hits, I decided then to focus on the first disc for that article, and as such, today we'll be taking a look at some of his stuff from Disc 2. As was the case with Disc 1, there are a few tracks here that I've covered in individual articles and I'll probably be leaving a few more here for their own articles in the future.

To be honest, when I first listened to "Ai no Super Magic" (Love is the Super Magic), I was caught a bit off-guard by that opening salvo of the title but when I got used to that particular greeting, I found the song pretty comfortable with that hint of Caribbean and Bacharach. The songwriting team of lyricist Kazumi Yasui（安井かずみ）and composer Kazuhiko Kato（加藤和彦）was responsible for this non-single track that was originally included in Inagaki's 6th studio album "Realistic" from March 1986. The album was a No. 1 hit for the singer and ended up as the No. 16 album of the year.
Inagaki's 7th album was also another No. 1 hit, "Mind Note" from March 1987 and it begat the reassuring love ballad "Toki wo Koete" (Beyond Time). Copywriter Yoshiaki Sagara（さがらよしあき）along with Hiroshi Shigemi（重実博）provided the lyrics about being there for someone during the hard times although I get the impression that there is a one-sided love thing about it all. Actress-turned-singer/songwriter MAYUMI came up with the perfectly AOR romantic melody which fits Inagaki to a tee.
Gotta be with my girl! That's the message from Inagaki's "Kimi ni Aitai Gogo" (The Afternoon I Want to See You), a track from his April 1989 9th album "Heart & Soul". Yasushi Akimoto（秋元康）wrote the words about a fellow who's barely enduring the weekdays that he has to go through before being able to see the girlfriend for a weekend of dining, driving and loving. Once again, MAYUMI was behind the music here which has the tropical feeling but also has that unmistakable sense of either Steely Dan or the Doobie Brothers.
I chose "Stay With Me" just to see how many Miki Matsubara（松原みき）fans would perk up, but although Inagaki indeed covered the Matsubara classic years later, this first "Stay With Me" is a wholly different animal. As another track on "Heart & Soul", this was once again written by the aforementioned Akimoto and composed by Junichi Kawauchi（河内淳一）, and though this song won't have anyone forgetting that other "Stay With Me", this Inagaki original is pleasant enough with some hints of Motown. I probably would have preferred some horns over the synthesizers, though.
My final song for the article is Inagaki's 18th single "Shine On Me", a very uptempo and bright-sounding tune released in March 1990. Y'know, I'd always thought that the singer had the demeanor of a button-down mid-level manager in a huge corporation, and maybe the person who came up with the music video for "Shine On Me" thought the same as well. Inagaki looks perfect as a corporate kacho in that open-format office, but of course, he's also fine behind the mike to perform the song which was written and composed by songwriter Tatsuto Kuwamura（桑村達人）. The song was also placed in Inagaki's April 1990 album "Self Portrait".
Following the listen to Disc 2, my general impression is that Inagaki gradually shed some of that Japanese City Pop as the 80s came to and end, and went into a more West Coast pop direction although I don't think that he strayed far from his AOR roots. He will always be my Mr. Relaxation of J-Pop! 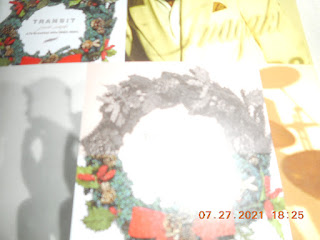