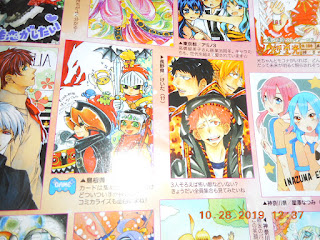 Conversing with my anime buddy weekly, I've been aware that he has not only been enjoying the second season of "Kobayashi-san no Maid Dragon"（小林さんちのメイドラゴン）but there's been another series catching his eye.

Titled "Kageki Shojo!!"（かげきしょうじょ!!...Opera Girls!!）, the original manga is all about a fictionalized version of the famed Takarazuka Revue Company, the all-female musical acting troupe known for their very elaborate performances. I actually put up an article earlier this month on what has become the troupe's trademark song. As for the anime adaptation that began almost a couple of months ago, it's all about the laughter, tears, trials and tribulations for the girls going through the exclusive academy to train and educate them into becoming top stars on the stage.

Frankly speaking, I've yet to see an episode (it may be a tad too melodramatic for me) but my anime buddy did cotton me onto the ending theme. As soon as I saw that ending credit sequence, I knew that it was just screaming Takarazuka at me. The ending song itself is "Hoshi no Tabibito" (Star Traveler) which is performed by a couple of the seiyuu cast, Sayaka Senbogi（千本木彩花）and Yumiri Hanamori（花守ゆみり）. Both voice thespians are familiar to me from other shows, especially with Hanamori since she has portrayed the long-suffering but immensely resourceful Ai Hayasaka from "Kaguya-sama: Love is War".

For this particular ending, Riko Sasaki（佐々木李子）and Sumire Uesaka（上坂すみれ）tackle the theme under the title "Shinayaka na Mirai"（シナヤカナミライ...An Elegant Future）. Apparently, the ending for Episode 8 features yet another version with another change in title and lyrics and seiyuu. In all cases, I can also hear the Takarazuka-ness of it all through the nimble and dramatic melody by Tsuneyoshi Saito（斉藤恒芳）, and he was also responsible for the different sets of lyrics.

Ah, I can feel the sweet pain!