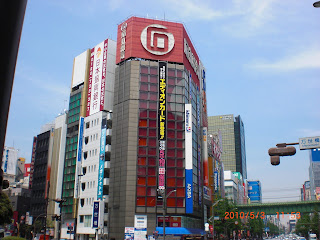 I've mentioned this before and I'll mention this again but summers are one of the very few things that I don't miss about the Tokyo area because of the oppressive heat and humidity. One place I do miss though is the electronics district of Akihabara although in recent years, people have wondered whether it's solely a place for the gadget geeks anymore and now just one of the many entertainment areas in the megalopolis. Whatever the opinion is, I remember relying on Akihabara during those hot summers for air-conditioned solace in any of the electronics shops such as Ishimaru, Laox or Yodobashi, especially when I could get a free massage in those souped-up massage chairs. Even outside, there have been plenty of vending machines to slake a very dry thirst although in the height of the summer, a lot of juices and milks were sold out.

Anyways, I am here tonight to present "Akihabara" by Mitsuyoshi Azuma（吾妻光良）& The Swinging Boppers. I never would have imagined that a blues song would ever be made for this particular neighbourhood. Ginza, Asakusa and Ueno have probably had their blues songs but Akihabara?

Yet, here one is and "Akihabara" is so bluesy that I just had to put in the Blues label for the first time on KKP (and so I'll have to hunt down any other kayo in the past that can fit the category). This song was created and performed by Azuma and his band as a track for their third album "Stompin' & Bouncin' ~ The Great Victor Masters 1990-1991" which was released in October 1991. There are some fine horns dancing about in the performance and Azuma himself has a nice mix of rasp and gloss in his vocals, and from what I can understand from the sung lyrics, he's describing what Akihabara was like back in those days: a huge square of electronic parts and appliance shops for the appropriate geeks to delight in.

Starting out in Shinjuku in 1979, Mitsuyoshi Azuma & The Swinging Boppers specialize in jump blues and swing jazz according to J-Wiki. When Azuma was a part of a music circle called Rock Climbing at Waseda University, he and his friend who had been involved in jazz music decided to hold a Big Band performance as a graduation memento event which led to the eventual formation of The Swinging Boppers. Their first album, "Swing Back With The Swinging' Boppers", came out in 1983, and it was only a couple of years ago that they released their most recent album "Scheduled by the Budget", and there has even been a single which came out last year in November, "Big Bug Boogie".