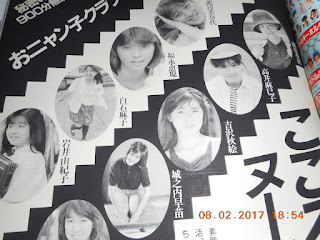 Marcos V. was the first one to introduce 80s aidoru and Onyanko Club（おニャン子クラブ）member No. 40 Akiko Ikuina（生稲晃子）onto "Kayo Kyoku Plus" through his two entries in 2014: "Virgin Shounen ni Kuchizuke o" (Virgin少年に接吻を) which was her September 1988 2nd single and then her song as part of the trio Ushirogami Hikaretai（うしろ髪ひかれ隊）, "Anata wo Shiritai" (あなたを知りたい) from August 1987.

Uh...nope, I'd have to agree with my KKP friend from Brazil that Ikuina never had quite the vocal chops that her colleague from Ushirogami Hikaretai, Shizuka Kudo（工藤静香）, had but as had been the case with many an aidoru from that decade, the music and arrangement did come to some of the rescue. And thus, we come to her "Chase Chase Chase" from her November 1988 debut album "Ikuina De-Dance"（「生稲」De-Dance）which hit No. 11 on Oricon.

When I first heard "Chase Chase Chase", I thought that I was hearing a blend of Paul Lekakis' "Boom Boom" and Harold Faltermeyer's "Axel F" from the "Beverly Hills Cop" soundtrack. I can thank bassist and composer Tsugutoshi Goto（後藤次利）for bringing in some of that 80s dance pop and perhaps some of that Eurobeat as well into the arrangement. Ren Takayanagi（高柳恋）was responsible for the lyrics. Listening to "Chase Chase Chase" a few times now, I realize that this won't enter the annals of the 80s Aidoru Hall of Fame but it's indeed the quintessential late 80s aidoru tune that I used to hear all the time on "The Best 10" and during interludes in variety shows.