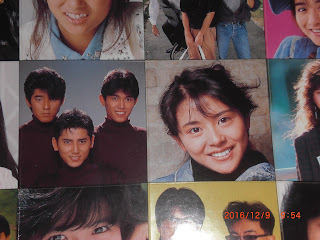 Ah, once again I bring you one of those many 80s aidoru that quickly came and went while getting those five minutes of fame. Additionally and as is often the case, there's very little information to be found out regarding this young lass.

Hitomi Ozaki（尾崎仁美）was born in 1969 and had an aidoru career lasting a little over two years according to what her page on "Idol.ne.jp" says. Her debut single from February 1986 was "Soushunki" which I believe means "Early Spring", so I can assume that the lyrics by Haruki Tango（丹古晴己）are talking about heartfelt falling heads-over-heels in love. The melody that hints at some of that haunting romantic uncertainty is by Kyoko Kosaka（小坂恭子）with arrangement by Eiji Kawamura（川村栄二）.

What strikes me about Ozaki though are those high-pitched clear-as-a-bell vocals that make her sound even younger than those sixteen years that she was registering when "Soushunki" was released. I don't know as of yet about her remaining four singles going into early 1988 but I think that with this inaugural song, she actually had a promising beginning. Then again, perhaps she didn't really stand out significantly enough from the rest of the aidoru crowd.