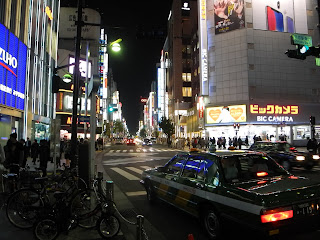 Ahhh...the bright lights of East Shinjuku. I just hope that they are still burning bright during this pandemic. Would love to walk on those streets once more.

Mind you, when I was living in the mountains of Gunma Prefecture over 30 years ago, I learned a gesture and an expression from my fellow staff and teachers at probably one of the many enkai that I had to attend. The gesture was doing jazz hands and the expression was "neon ga yonderu"（ネオンが呼んでる）. It literally means "The neon lights are calling" but I believe the true meaning is an invitation to paint the town red, and of course, living in the old town of Tsukiyono where the traffic lights start flashing on and off from the late hour of 8 pm every night, yep, I can imagine that there were folks in Gunma who were itching to get some big city time in Tokyo, 70 minutes away by Bullet Train.

During my time in the Tokyo area, I basically had access to the nocturnal lights and delights of the megalopolis pretty much all the time, but of course since I had something called a job and I was frankly anything but a party animal, "neon ga yonderu" only applied to me for a surprisingly smaller amount of time than expected. Of course, I had acquaintances who more than compensated for my introverted nature...and sometimes paid a heavy price, and I just don't mean financially. Still, I can understand the attraction of having fun in one of the largest cities on Earth.

Anyways, my preamble ramble was all to introduce a song whose title is quite similar to that expression that I learned in Gunma decades ago. The band evening cinema, which now has fair representation on "Kayo Kyoku Plus", has been around to give out their brand of urban contemporary music with a base of 70s and 80s City Pop. The most recent article that I devoted to leader and vocalist Natsuki Harada（原田夏樹）and company was back in December with their 2020 single, "Night Magic", which I felt had some of those influences of Kirinji and ORESAMA.

Well, I've gone back even further into November 2019, and this time, their single from back then, "Neon Sign ga Yonderu" (The Neon Signs are Calling) seems to be harkening back to the rhythms of Tatsuro Yamashita（山下達郎）. Written and composed by Harada, the song also has those tiny bleeps and bloops to keep things nice and contemporary. However, the lyrics don't really talk about getting that invitation to frolic in the big city; actually, they seem to be about a guy hopelessly in love and getting all restless every minute that he's away from the target of his ardor. Still for me, it's the bass, piano and saxophone that have gotten my attention.

"Neon Sign ga Yonderu" is also a track on evening cinema's August 2020 mini-album "Aesthetics". I think the effect of Vaporwave was not lost on these guys, and certainly the cover for the single itself has that sort of look.