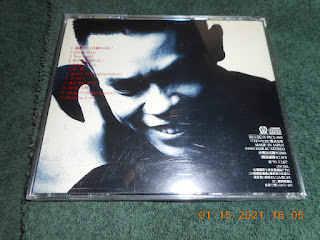 Good heavens, it's been a while since I've written about singer-songwriter Keizo Nakanishi（中西圭三）so I'm glad that I could find another song by him on YouTube. His heyday was in the 1990s and I think that he was up there with The King of Love Songs Masayuki Suzuki（鈴木雅之）himself when it came to Japanese soul singers. One thing about Nakanishi is that he often also added a touch of Motown to his creations.

This particular song, "Precious Love", finishes up his third original album "Steps" from March 1993, but I first heard it as part of a mix tape that my cousin had sent me decades ago. With lyrics by prolific Masao Urino（売野政男）, music by Nakanishi and arrangement by Takao Konishi（小西貴雄）, "Precious Love" is another quintessential Keizo tune with the percolating beats, the upbeat melody and of course the singer's soulful tones. Along with those beats, I think another highlight is the sax solo; I can be an absolute sucker for them.

"Steps" was a No. 1 hit for Nakanishi and the album also contains another supremely catchy track, "Ticket to Paradise".