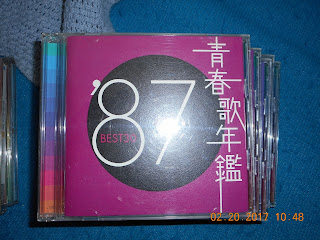 When "Kayo Kyoku Plus" contributor nikala provided an article on Shizuoka-born musician, producer and singer Masami Tsuchiya（土屋昌巳）through "Stay in Heaven", like her, I started likening him to late 1980s David Bowie slightly in terms of his looks but much more in his presentation and choice of music. Tsuchiya and "Stay in Heaven" made for some very arresting viewing and listening.

As nikala also mentioned, "Stay in Heaven" is the first track on Tsuchiya's third album "Life in Mirrors" which was released in October 1987 which involved Minako Yoshida（吉田美奈子）and David Sylvian among others. Another banger is Track 4, "Mizu no Naka no Hotel", literally translated as "The Hotel in the Water" but given the flashier title of "Hotel Atlantis" instead. I gather that Aquaman needed a side job as a hotelier to afford all that rinse and conditioner for his hair living in seawater.

The same duo that created "Life in Mirrors" was also responsible for "Hotel Atlantis", Yasuo Sugibayashi (杉林恭雄) , himself the vocalist for the rock band Qujila（くじら）, taking care of the lyrics while Tsuchiya created the percolating melody and arrangement. I can only say that this Hotel Atlantis must be a really happening establishment underwater considering all of the instrumentalists having a party down there. I especially have to give kudos to guest jazz trumpeter Guy Barker from the UK for his scintillating solo. He had me thinking of everyone from Miles Davis at warp speed to Maynard Ferguson.

In all honesty, although I put "Hotel Atlantis" in the New Wave and Rock categories, I think something like this song rather traverses those boundaries. Doesn't matter...it's a cool song and I can only wonder if there was ever a remix version made of it.