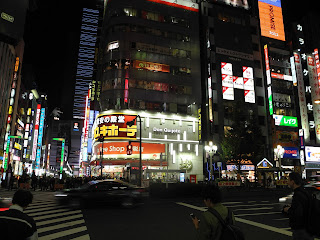 For me, the genre of Mood Kayo with its Latin, Hawaiian or bluesy influences sends me images of swanky bars or nightclubs, hidden or overtly famous with the backup choruses intoning their "wa-wa-wa-wa". Enka is even more traditional with the themes of love and challenges in the countryside. However, there is that certain corner of enka which does take place in the city usually with that guitar-toting balladeer poking into the more modest and smaller drinking establishments within the older quarters of Tokyo and then playing a sweet love song.

That's how I think of "Shinjuku Jouwa" (Shinjuku Love Story) which was written by Ryo Inomata（猪又良）and composed by the late and great Toru Funamura（船村徹）. Inomata created a story of a barfly in a tiny watering hole in Shinjuku...perhaps somewhere on the famous bar street known as Golden Gai...when he sees a woman crying softly along the bar. He knows her as Hiroko and apparently she's had another heartbreak or some bad fate befall her for which he offers her a shoulder to cry upon and perhaps his rickety apartment to sleep it off at. He may be a comrade-at-arms just helping a buddy out or he may have some deeper feelings for her which is why the really cynical part of me wants to say "Watch out, Hiroko!".

Scrolling down Funamura's long list of creations for singers in his J-Wiki file, it seems that "Shinjuku Jouwa" was first recorded by baritone/bass-voiced Moody Matsushima（ムーディー松島）in 1968. With a name like that, Matsushima probably has done Mood Kayo but here, it's more of that mournful enka. His real name is Takashi Matsushima（松島孝）and hailing from Tochigi Prefecture, he started his singing career in 1967 and "Shinjuku Jouwa" was his 3rd single. According to the Showa Pop Encyclopedia, he released at least four singles in the late 1960s and then perhaps two singles in the 1980s but his discography is a tad sporadic.

Judging from seeing some of the videos on YouTube, "Shinjuku Jouwa" has been covered a lot, and it's no surprise since the ballad is definitely one to let out the emotions through a genre that is supposed to allow for a lot of emotional release. Unfortunately, I couldn't find out which year singer Naomi Chiaki（ちあきなおみ）had recorded her version of the song although it's available on her 1994 "Chiaki Naomi Vol. 3 ~ Shinjuku Jouwa", a couple of years after she had retired from the geinokai.

The arrangement for Chiaki's cover is not all that much different from the original by Matsushima, but there are the additions of a crying violin and some form of accordion to enhance the melancholy qualities of "Shinjuku Jouwa". Of course, the Latin guitar of the balladeer has to be there, too.

Here is another enka singer that I hadn't heard of but he also gives a wonderful take on "Shinjuku Jouwa", although his vocals are more in the tenor range. Eiji Miyoshi（三善英史）released his take on the song back in 1979 through his album "Enka"（演歌）, his final original album, although he has continued to release singles up to 2017 according to his own J-Wiki article. His version of "Shinjuku Jouwa" has a slightly more languid tempo and he has a bigger string unit backing him up.

Miyoshi hails from Tokyo's Shibuya Ward and made his debut in 1972. He's even appeared on the Kohaku Utagassen a total of three times between 1973 and 1975.

I couldn't finish this article without having the master Funamura himself perform "Shinjuku Jouwa". Again, I haven't been able to track down when he covered the song but according to Tsutaya, it's not on the album portrayed in the thumbnail above, "Kitai no Mei Kashu ~ Funamura Toru"（希代の名歌手 船村徹...The Extraordinary Singer: Toru Funamura）. Funamura gives an especially heartrending version since his vocals feel as if he's looking at poor Hiroko as his own daughter or granddaughter.