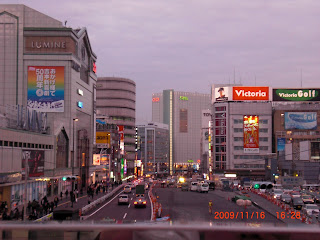 Ahhh...the southern entrance for Shinjuku Station. I remember when things really started to get moving for this side of the mammoth JR depot in the late 1990s...1997, I believe. Takashimaya Times Square, consisting of the venerable department store Takashimaya, Tokyu Hands and then Kinokuniya Book Store, was built just across the street from the station, and in more recent years, a commercial facility on top of a new adjunct for Shinjuku Station was constructed. Off in the distance on the left is Tower Records, a place that I visited very often.

Time for something older and more atmospheric, and for that, I can give you something along the lines of singer-songwriter Makiko Takada's（高田真樹子）"Blues Singer". A track from her 1974 debut album "Makiko first". Arranged by Mitsuo Hagita（萩田光雄）, I'm not sure how much of a blues song this would be since I'm not well-versed in the genre, but this is definitely in the New Music vein. From the delivery, I'd say that Takada reminds me of a certain Western singer but I can't say who right now. "Blues Singer" is a tune that would demand some sort of sipping alcohol and a contemplative mood in a darkened room. After all, I did say that it was rather atmospheric.

"Makiko first" also has a song that I covered in the past: "Watashi no Uta no Kokoro no Sekai" （私の歌の心の世界）. If I ever get back to Japan in the next few years, I wouldn't mind tracking the album down...maybe at that Tower Records by Shinjuku Station.