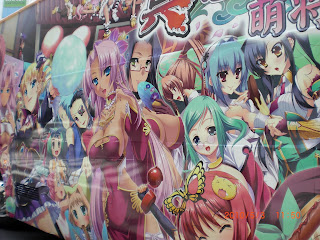 I gather that for a lot of anime fans, seiyuu Yū Kobayashi（小林ゆう）brings up the character of Sasha Blouse from "Shingeki no Kyojin"（進撃の巨人...Attack on Titan） who probably had potato farmers all over the planet crying in pride and joy.

However, I never got interested in "Shingeki no Kyojin". Instead when the name is brought up, I usually go to her very lascivious character of Naruko Yokoshima from "Seitokai Yakuindomo"（生徒会役員共）. As well, she played the extremely competent but quietly intimidating assistant to a family in "Koufuku Graffiti"（幸福グラフィティー）some years later.

As such, I got accustomed to hearing Kobayashi speaking in a husky voice so it was with some surprise that I came across this opening credit sequence to an even earlier anime called "Maria†Holic"（まりあ†ほりっく）which began its run from 2009, about a couple of years before I waded my way back into the anime world. I've heard the title before but never saw this show which is about all of the usual comedic hijinks in a high school where the title character played by Kobayashi is quite unique.

But that first season opening theme of "HANAJI" (Bloody Nose) is catchy with the rockabilly sensation and the interesting thing is hearing Kobayashi singing the song in that high and squeaky voice. Written by Satomi Arimori（有森聡美）and composed by Dai Murai（村井大）, "HANAJI" seems to reflect all of the excitement and chaos that Kobayashi's Maria brings to the proceedings; apparently, Maria is quite the sadist.

"HANAJI" was Kobayashi's 3rd single released in February 2009 and it peaked at No. 13 on Oricon.