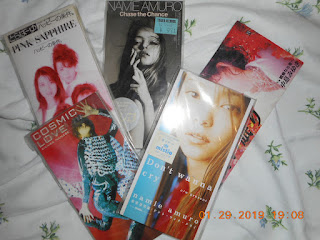 Ooh, boy. I think that we broke some temperature records today and we may even top those by tomorrow afternoon. The fan and the air conditioner have been pulling off some double duty today and I figure that before I get out of bed tomorrow morning, I may turn on the fan for an hour or so. It rather feels like being back in Ichikawa during the summer but I know that things were even hotter and stickier at night over there.

Well, I figure that I can post a somewhat more cooling article tonight before hitting the shower and bed. Therefore, I'm going to go with Sachiko Kumagai's（熊谷幸子）"Koi no Iro" (Colour of Love). When I first heard her debut single from June 1992, I couldn't help but sense the Yuming-ness of the song, and sure enough, Masataka Matsutoya（松任谷正隆）, Yuming's（ユーミン）husband, was behind the lyrics under the pseudonym Mica Project（マイカプロジェクト）and he also co-arranged everything with Kumagai herself. Kumagai was also responsible for the basic melody.

It's not just the mellow melody but the use of those pan flute synths and the gentle piano that worked as the equivalent of a Japanese wind chime. The only thing missing is a tall glass of Calpis! "Koi no Iro" was also a track on Kumagai's debut album "Art of Dreams" which was released in September 1992. The album also contains her 2nd single "Mirai wa Kimi no Mono"（未来はきみのもの）which I wrote about back in early 2018. Anyways, I'm going ahead to peel off my clothes to head into a shower.