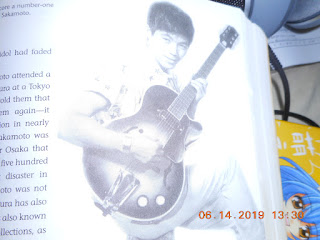 A couple of days ago, there was a tweet from someone that I follow. He hadn't known about the fate of singer Kyu Sakamoto（坂本九）, the original singer behind the classic "Ue wo Muite Arukou" (上を向いて歩こう), and he was shocked to learn that he was one of the passengers on Japan Airlines Flight 123 which had crashed into a mountain in Gunma Prefecture on August 12th 1985, killing 520 people on the plane including Sakamoto. It still remains the deadliest single-aircraft incident in aviation history.

I remember hearing about the incident as a university student and soon learned of Sakamoto's death. There was an episode of Fuji-TV's "Yoru no Hit Studio"（夜のヒットスタジオ）music show not long after in which a tribute was made with enka singer Shinichi Mori（森進一）singing one of Sakamoto's hits "Miagetegoran Yoru no Hoshi wo"（見上げてごらん夜の星を）on a darkened stage. Even before his tragic passing at the age of 44, that particular ballad was fairly easy to induce tears, and Mori looked absolutely shattered as he was singing it while the hosts and guests were doing a fair amount of weeping themselves. It was awfully hard to watch.

Of course, the above two songs of Sakamoto that I've already mentioned will be among his most famous numbers, but there is a B-side to what would be his final single "Natsukashiki love-song"（懐しきlove-song...A Nostalgic Love Song） released in May 1985, less than three months before the horrible accident. "Kokoro no Hitomi" (Eyes of the Heart) was written by Toyohisa Araki（荒木とよひさ）and composed by Takashi Miki（三木たかし）with Makoto Kawaguchi（川口真）as the arranger, and it's a contemporary-sounding pop song with a feeling of a Boz Scaggs ballad that has gained even more poignancy as time has passed and because of the circumstances. It seems to come across as a farewell song as Sakamoto reassures folks that no matter how quickly time flies, the heart and love will always be there.

"Kokoro no Hitomi" has been covered by a number of other singers over the years but I found this video from a September 2004 festival devoted to Sakamoto (video uploaded by 305Bell) which has his widow and two daughters performing the song. You may want to have a few tissues handy.